The penchant for death-defying stunts, the disregard for personal safety and the need to one-up himself with each new film. The signs are there: Cruise is becoming the Jackie Chan of Hollywood.

For Mission: Impossible 5, he is actually strapped to the outside of an airborne plane. His feet are dangling away as he is flung back by the sheer force of the wind and he is clinging on fiercely with his hands for dear life. He does it, not once, not twice, but eight times.

The making-of stunt featurette is probably the best trailer for the film and has already been viewed more than seven million times on YouTube.

It says something about director Christopher McQuarrie's confidence that this stunt opens the movie instead of being kept for the finale. 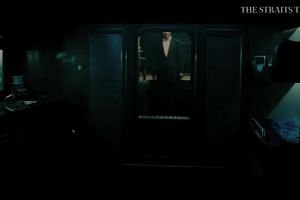 There are plenty of other action sequences - or wanton acts of mayhem, as the CIA puts it - to get into. There is a high-speed metal- crunching vehicular chase through the narrow streets of Morocco, a tense assassination attempt at an opera and, for the piece de resistance, a power station with so many layers of security that it involves a heroic act of breath-holding in order to access an underwater chamber.

I am still not sure why a power station would need this level of protection but, then again, the movie needs these ludicrously convoluted set-ups to justify the IMF.

Remember the Adidas slogan Impossible Is Nothing? It could work equally well as a motto for this franchise series. The word "impossible" is like catnip to super agent Ethan Hunt.

McQuarrie, best known for writing the script for the acclaimed thriller The Usual Suspects (1995), keeps the story moving along, though there is a whiff of familiarity about the proceedings. In the previous instalment Ghost Protocol (2011), Hunt had to go rogue as well and operate without official approval.

Adding a welcome touch of humour as always is Pegg (Man Up, 2015), who reprises his role as the loyal techie Benji.

The film is also on top of the latest cinematic trend.

Swedish actresses are officially the hottest thing in film at the moment, with Alicia Vikander lighting up the screen in Ex Machina (2015) and, now, Ferguson as the mysterious Ilsa Faust.

For all the thrilling action and gee-whiz spycraft on display, the takeaway message is a surprisingly prosaic one: Always back-up your files.