Way before the ubiquitous ez-link card entered Singaporeans' lives, taking a bus meant coming face-to-face with not just the driver, but also the bus conductor.

With a small satchel slung across his body and armed with a ticket puncher, the conductor would hand out tickets - small pieces of paper printed with rows of numbers - after passengers had paid their fares.

In the 1980s, the bus conductor was phased out and passengers deposited their fares into an automated receptacle upon boarding.

Now, they can relive those memories at the inaugural Singapore Bus Carnival, which starts today and runs till Sunday at Ngee Ann City's Civic Plaza.

Organised by the Land Transport Authority (LTA), the free roving event will move to VivoCity's Outdoor Plaza from March 25 to 27, and to HDB Hub in Toa Payoh from April 1 to 3.

The carnival is divided into three zones - past, present and future. Visitors can check out a refurbished green vintage bus from the 1960s and other bus memorabilia such as a 1941 ticket machine and old concession passes, get behind the wheel of a bus simulator and find out about new initiatives such as e-paper displays for bus arrival information.

The exhibition comes during a new chapter for the industry as it transitions to a new contracting model, where the Government owns all bus infrastructure and operating assets.

The carnival celebrates this milestone, says Ms Helen Lim, LTA's group director of corporate communications, by "giving the public a glimpse of the nostalgic past, showcasing current industry updates and providing a peek at what is to come as we ride into the new chapter".

The new colour of public buses will also be unveiled today at the carnival after a public poll was conducted to choose between two colours - bright red or lush green.

Bus enthusiast Chris Lee will be at the carnival to share stories.

The 33-year-old laboratory technician is one of 10 bus fans who have loaned the festival organiser some of their treasured memorabilia.

Mr Lee, who has amassed more than 100 items since he started his collection in 1995, is excited to see the vintage bus in its former glory.

"I have seen this bus rotting for years in a scrap yard, so it's great that the LTA has cleaned it up and put it up for display." 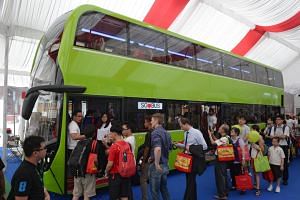 Lush Green is the colour of new public buses in Singapore

Visitors can also chat with representatives from public transport operators such as bus captains and vehicle technicians to find out what goes on behind the scenes.

Lawyer Seetha Ramasamy, 40, plans to take her seven-year-old daughter and four-year-old twin boys to the carnival.

She says: "I'm always looking for things to do with my kids and it will be interesting for them to see the buses I used to ride in." 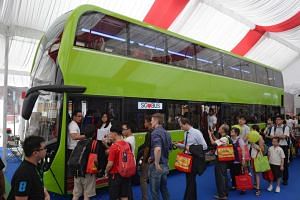