PARIS (AFP) - French singer Charles Aznavour, who died Monday aged 94, was buried on Saturday (Oct 6) in the family vault outside Paris after a private funeral at the city's St John the Baptist Armenian cathedral.

Media and public were kept away from the ceremony limited to Aznavour's closest entourage, including fellow artists Serge Lama and Emmanuelle Beart.

Following the service the cortege headed for Montfort-l'Amaury, west of Paris, where Aznavour was laid to rest alongside his parents and son Patrick, who died aged just 25 in 1976.

Afterwards, the cemetery was opened to the public to pay their own final homage to the singer who became a global entertainment name.

Saturday was declared a day of mourning, meanwhile, in his native Armenia with flags flying at half mast and masses held to mark his death.

Active until the final days of his life, Aznavour, who had indicated he hoped to make it to 100, had as recently as last month performed two concerts on the other side of the globe in Japan.

Next week, he had been due to travel to Armenia to accompany French President Emmanuel Macron for a Francophone summit and had expressed the hope he would like to breathe his last on stage. 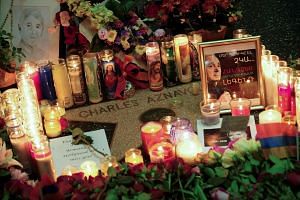 The extent of the high regard in which he was held in France was underlined by Friday's homage to him at the Invalides in Paris, a ceremony which drew a television audience almost three million across three channels or almost one in two viewers.

That ceremony at the Invalides began with Aznavour's coffin, draped in the French tricolour flag, being carried into the cobbled courtyard to the Armenian lament, "Dle Yaman", played on a traditional dudek flute.