The story: During World War II, the Japanese island of Hashima (also called Gunkanjima, or Battleship Island) was the site of a brutal mining operation that used forced labour, including boys from South Korea. South Korean women on the island faced the fate of being used as sex slaves. Bandmaster Lee Kang Ok (Hwang Jung Min) and his young daughter So Hee (Kim Su An), as well as notorious gangster Choi Chil Sung (So Ji Sub), are among those shipped off to it. Park Moo Young (Song Joong Ki), an American-trained operative, infiltrates the island to rescue a fellow independence fighter, but eventually tries to help about 400 Koreans escape.

There is more than one way to approach wartime movies, as the recent box-office successes of Christopher Nolan's Dunkirk and Ryoo Seung Wan's The Battleship Island prove.

In South Korea, the latter has been setting records and had surpassed six million admissions by the 12th day of its run.

Nolan keeps ratcheting up the tension in his portrayal of the Sisyphean task of staying alive, but does not really flesh out those caught in the cross hairs of battle. 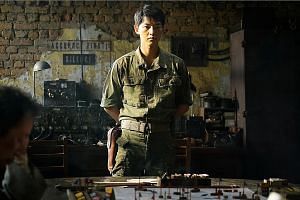 In contrast, writer-director Ryoo gives us a vivid cast of characters to root for in a thrilling tale of escape: Song plays the marquee role here like an extension of the super soldier-hero he played in the blockbuster series Descendants Of The Sun (2016); and the other K-drama star, So (Master's Sun, 2013), swaggers with menacing aplomb as the macho gangster who plays a pivotal part in the escape attempt.

But it is the father-daughter pair, played by award-winning actor Hwang (Ode To My Father, 2014) and child star Kim (Train To Busan, 2016), who anchor Battleship.

Lee will do anything to keep himself and his daughter alive; this survival instinct drives him on, even if it means he has to clown around for the amusement of the Japanese.

The grimness of the war situation is leavened by some sweet little moments shared between the two characters. Both Hwang and Kim turn in vivid portrayals.

Story-wise, Ryoo packs some surprises along the way, which prevents the proceedings from getting too predictable. There is a poignant scene where a woman reveals that she was betrayed by her countryman - a Korean pimp who condemned her to her fate as a "comfort woman".

The director also deftly handles the complex scenes depicting the hellishness of the underground mining and the intensity of the gripping finale.

While the escape is fictional, the island exists and was inscribed as a Unesco World Heritage site in 2015. At the end of the film, a coda notes that Japan has yet to acknowledge the events that took place there, a sombre reminder that the shadows and scars of war linger on today.