SINGAPORE - The car accident television star Rui En was involved in on Tuesday (April 12) was her second this year, said Lianhe Zaobao on Thursday.

After the incident involving her car and a stationary motorcycle was reported by Lianhe Wanbao on Wednesday, a reader informed Zaobao about another accident early this year, when the actress allegedly hit someone else's car and drove away.

The owner of the hit car posted Rui En's licence plate on social media to track her down, before the actress reached the owner and made a private settlement, said Zaobao. 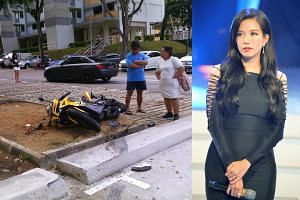 Channel 8 star Rui En involved in accident: Manager says it was a case of misjudgment 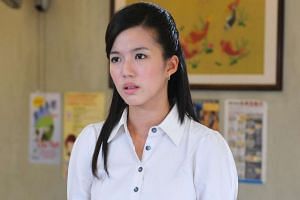 Actress Rui En says sorry for accident, manager explains her controversial remark 'Do you know who I am'

Rui En's manager confirmed to Zaobao that the star was involved in an accident at the beginning of the year. The manager said the incident was resolved satisfactorily, after which Rui En's certificate of entitlement ran out and she bought a new car. The manager declined to disclose more details, but denied that the star had run away after the accident.

Rui En, who is filming the police drama C.L.I.F. 4, is due to accept an All-Time Favourite Artiste Award at the upcoming Star Awards.

In Tuesday's incident, her car knocked over a motorcycle in the carpark near Block 331 Clementi Avenue 2. The police said they received a report about the accident at around 4.16pm.

Mr Bahrom Sarmiten, the owner of the bike, told Zaobao that Rui En walked back to her car and locked herself in it when the police arrived. She came out of the car after the police made repeated requests, he added.

She took a breathalyser test before she was taken to the police station for inquiries, said Zaobao.