CHICAGO (NYTIMES) - In a stunning move on Tuesday (March 26) that angered Mayor Rahm Emanuel and his police superintendent, prosecutors in Chicago dropped all charges against Empire actor Jussie Smollett, who had been accused of staging a hate crime attack in the city’s downtown in January.

“After reviewing all of the facts and circumstances of the case, including Mr Smollett’s volunteer service in the community and agreement to forfeit his bond to the city of Chicago, we believe this outcome is a just disposition and appropriate resolution to this case,” the Cook County State’s Attorney’s Office said in a statement.

In an interview later, Joe Magats, the prosecutor who made the decision, said that there had been no problems with the evidence or the police investigation into Smollett.

Magats said he dropped the charges after Smollett agreed to the community service and to give up the US$10,000 (S$13,000) he paid for his release, money that would have been returned to him if he had made all his court appearances.

He also noted that Smollett had no previous criminal record and said that the dropping of the charges “didn’t exonerate him.”

Smollett, 36, was arrested in late February, and on March 8, the State’s Attorney’s Office appeared to increase the pressure on him by announcing that he been indicted on 16 separate charges related to the attack report.

Less than three weeks later, prosecutors appeared to change their minds about pursuing the case any further. 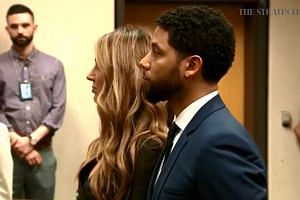 Soon afterwards, the mayor and the police superintendent, Eddie Johnson, whose detectives had spent many hours trying to find who had attacked Smollett, and many more trying to get to the bottom of his account, held a news conference attacking prosecutors and the actor himself.

Emanuel said that Smollett’s celebrity had played a role, calling it “a whitewash of justice.”

Johnson said, “I think this city is still owed an apology.”

Smollett appeared outside the courthouse and read out loud a written statement without taking questions.

He thanked his family, friends, and “the incredible people of Chicago and all over the country and the world who have prayed for me, who have supported me”.