LONDON • Lack of childcare on film and television sets limits women's careers, Carey Mulligan, star of Suffragette (2015), said on Tuesday, with many actors feeling they have to conceal their pregnancies.

The British mother of two praised action to combat sexual harassment in entertainment in the wake of the #MeToo scandal, but said she had "never" been on a set with childcare facilities, which was "limiting" for parents.

"I don't think being a working mother in our industry has been made that much easier," she said in an interview with the Radio Times magazine on Tuesday.

Sex discrimination was outlawed by Britain in the 1970s and the law prohibits employers rejecting a candidate because she is pregnant or may have a child in future.

But many employers hold views from "the dark ages" on pregnancy, seeing new mothers as less ambitious and believing that it is acceptable to ask job-seeking women if they have young children, Britain's equality watchdog found this year.

More than three-quarters of workers in British television and film said their career had suffered due to parenting or caring responsibilities, a 2016 survey by Raising Films, which campaigns to make the industry more parent-friendly, found. 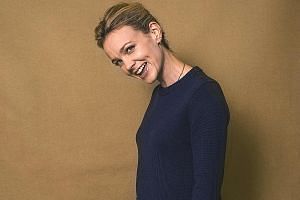 From music icon to serious actress

Mulligan said she was fortunate to have her pregnancy written into her role in this year's Netflix and BBC drama Collateral, but generally "if people can hide it, they do".

"The TV and film industry has notoriously terrible statistics when it comes to female talent and this isn't going to change until it gets serious about removing the barriers for parents and carers," she said.

Campaigners said the issue reaches far beyond the entertainment industry.

"Motherhood is the key cause of the gender pay gap," Ms Joeli Brearley, founder of maternity rights campaign group Pregnant Then Sc***ed, said.

"From the point that a woman gets pregnant, she is seen as less competent and less committed.

"But it isn't her ambition or dedication that should be in question. It is how companies and industries ignore the needs of working mums."