Actor Taron Egerton, who plays Elton John, says it is not a biopic

Taron Egerton wants to make one thing clear: Rocketman is not a biopic.

It is a musical. That is why the 29-year-old Welsh actor, who plays English musician Elton John, sings the hits on the soundtrack instead of relying on lip-sync.

"Musicals require an actor who can sing. Also, in a musical - at least in a good musical - the songs move the plot forward and reveal things about the character's inner life and psychological development," he tells The Straits Times last month over the telephone, just before attending the film's premiere in Sydney, Australia.

It is understandable why Egerton would make clear that his picture is no standard rock biopic.

It has been only a year since the release of the Oscar-winning Freddie Mercury film, Bohemian Rhapsody, which Rocketman's director Dexter Fletcher also helmed in an uncredited capacity following the firing of disgraced film-maker Bryan Singer.

In Rocketman, musical segments with actors performing choreographed routines break out on the streets and living rooms - unlike the more realistic Rhapsody, in which music happens in concerts and recordings that take place within the world of the film. 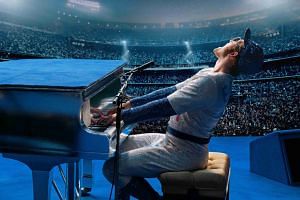 He considers both goals - as a singer giving Elton John classics such as Your Song, Crocodile Rock, Tiny Dancer, Goodbye Yellow Brick Road and Bennie And The Jets their due, and as an actor playing a man hounded by demons which he countered with drugs, alcohol and sex - to be of equal importance.

"As an actor, it demands so much of me technically, in singing, the music and the exuberance of the performance," he says.

"But there is also the other aspect of the performance, which is that he was a deeply troubled person, an unhappy person trying to find stability in life. He wants love."

One relationship the film sheds light on is John's close friendship with lyricist Bernie Taupin (played by Jamie Bell).

In the film, Taupin is shown to be more than a hired gun or working partner: John considers him to be an equal, an artist whose phrases trigger the singer's creative impulses, as illustrated in the scene showing how the ballad, Your Song, came to be.

"Sometimes, you meet someone and you just connect. It was a subconscious, primal thing.

"It's at the heart of our film because it's the first significant relationship that Elton formed for himself," Egerton says.

"Elton's songwriting was limited to melody and there was something to Bernie's poems that set Elton alight."