NEW YORK • BTS lead singer Kim Nam-jun grew up in Ilsan, South Korea, imagining he was a superhero until self-doubt settled in at age nine or 10.

"I think that was when I began to worry about what other people thought of me and started seeing myself though their eyes," he said.

"I tried to jam myself into the moulds that other people made."

That revelation came when he and his bandmates brought their star power to the United Nations on Monday, telling the world's youth to listen to their inner voices and resist the pressure to conform.

"No matter who you are, where you're from, your skin colour, your gender identity, just speak yourself," Kim told a packed hall at the launch of a Unicef youth campaign.

Dubbed Generation Unlimited, the campaign to promote education, training and employment kicked off during the annual gathering of world leaders at the United Nations.

Kim said there were times when he wanted to quit music, but he overcame his insecurities by listening to the "small voice that said, 'wake up man and listen to yourself'". 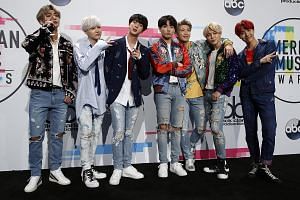 How boyband BTS got to the top

"I have many faults and I have many more fears, but I am going to embrace myself as hard as I can and I'm starting to love myself," he said.

BTS made history this year by becoming the first K-pop group to top the Billboard album chart.

"BTS have become artists performing in huge stadiums and selling millions of records right now, but I am still an ordinary 24-year-old guy," said Kim.

"We have learnt to love ourselves, so now, I urge you to 'speak yourself'."

A version of this article appeared in the print edition of The Straits Times on September 26, 2018, with the headline 'BTS to world's youth at UN: Do not conform'. Subscribe
Topics:
More
Whatsapp Linkedin FB Messenger Telegram Reddit WeChat Pinterest Print Copy permalink