The race between local actor Christopher Lee and his younger brother Frederick for the Best Actor Award at this month's Asian Television Awards put the siblings back in the spotlight.

Neither went home with the coveted prize at the Dec 2 awards. But it seems like neither had thoughts of taking the award home in the first place.

The 45-year-old Christopher was rooting for his brother, saying: "I wanted him to win. I want his career to reach greater heights."

The star was nominated for his role as a pragmatic record-label boss in Channel 8 music-themed drama Crescendo.

The younger Lee, 40, did not dare harbour thoughts of beating the other nominees, including his brother.

"My older brother has much more acting experience, he is more talented. He is my acting guru, he has been my role model since I was young. How could I surpass him?" asks Frederick, who was nominated for his role as a zealous cop in Malaysian crime thriller drama, Turning Point. 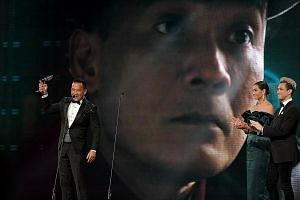 Frederick was speaking to The Straits Times over the telephone from Taipei, where he is based. He is following in his brother's footsteps - venturing into the Taiwan market under the same Taiwanese talent agency Catwalk.

Christopher has already blazed a trail in Taiwan, making his mark two years ago with his Best Actor win at the prestigious Golden Bell Awards for the hit family drama, A Good Wife (2013).

Though Christopher joined Catwalk in 2012 to broaden his horizons abroad, he still takes on local productions such as Channel 8 drama Crescendo and an upcoming Chinese New Year film.

But is the Taiwanese industry ready to accept a Christopher look- alike?

Genetics proved to be a stumbling block for the dapper Frederick when he tried to break into the Singapore market after winning MediaCorp's Malaysia Star Search (2003).

Then, Christopher was already a suave Channel 8 leading man, having made his break placing second on the local edition of Star Search (1995).

"A small market like Singapore did not need two acts that looked similar. The audience might get us mixed up. It was a blessing that I headed back to Malaysia", says Frederick, who became a regular face on Malaysian TV. He nabbed the Best Actor award at Malaysian TV station NTV7's Golden Awards (2014), the equivalent of Singapore's Star Awards.

With the confidence of a veteran, Christopher believes it is possible for the brothers to make it in the same market.

"Even if we look alike, we are two individuals with different personalities and working styles. I believe he will carve out a niche for himself," says Christopher, who describes himself as an extrovert and his brother as an introvert.

Frederick has long come to terms with the double-edged sword of being Christopher's younger brother.

"When I first started, I was concerned about stepping out of my brother's shadow. I got over it and realised that there are advantages. Audiences get to know who I am quicker. Because he is experienced, he is able to share with me the pitfalls to avoid," says Frederick, who will spend the next few months in Taiwan going for auditions and meeting directors.

Should there come a day when the two brothers go head to head in an audition, Frederick believes they will compete as professional counterparts.

"Competition is inevitable in the business. If I get the job, sorry," says Frederick with a laugh.

In Christopher's opinion the scenario is unlikely to happen. He says: "If the production company looks for me, they won't look for him. And vice versa. We are five years apart, so we are suited for different types of roles."

Producers can approach the brothers to star in the same production - both indicated an openness to this in separate interviews.

"I hope there will be a chance in the future, if I am still acting then," says Christopher with a chuckle. "We could play brothers, but it would not require much imagination. It would be great to play roles that help us explore our potential."

The Lees walked away empty- handed at the Asian Television Awards, but it was a rare opportunity to spend quality time with the family.

He says: "There is a sense of euphoria when your niece or nephew acknowledges you. When I said bye to Zed, and he said bye back, it was a touching moment for me."

Meanwhile, Christopher has jumped at the opportunity to advocate the joys of fatherhood to his bachelor brother.

Frederick says: "My big brother didn't use to interfere with my personal life. Now that he has become a father, he keeps telling me to get married and experience the bliss of having kids of my own."

The Kheng siblings have put their genetic lottery win to good use.

Blessed with musical talent and photogenic good looks, they form one-half of the hottest indie-pop act The Sam Willows in Singapore.

The other half comprises Sandra Riley Tang, 25, and Jonathan Chua, 26.

The singer-musicians have come a long way since performing at a school alumni concert and uploading cover songs on YouTube. The quartet inked a label contract with Sony Music Entertainment last year, and this year staged a ticketed show with a 2,500-strong crowd at The Coliseum, Hard Rock Hotel Singapore.

Who says you should never work with a family member? In a past interview with The Straits Times, Narelle spoke fondly of her big brother: "We've never been closer. You get to spend so much time together."

Actresses Hayley and Jayley Woo, both 24

Looking like a carbon copy of another actress can shrink the pool of jobs available to you.

The Woo twins have overcome that obstacle and are booking a steady stream of jobs on both the small and big screen.

This year, older twin Hayley is in love-themed anthology movie 4Love and Channel 8 TV series such as Fire Up and 118 sequel.

Mediacorp-signed Jayley is on Channel 8 dramas such as The Queen and Peace & Prosperity. She also made it to the Top 10 Most Popular Female Artistes at this year's Star Awards. The twins have also used their identical looks to their advantage by playing twins in local film That Girl In Pinafore (2013).

The twin teens with a dream dropped out of school to pursue a singing career, forming the duo By2 almost a decade ago. They went on to release six albums, spanning from their debut album 16 Underaged (2008) to their latest offering Cat And Mouse (2016).

All grown up, the girl-next-door lasses have transformed into sexy sisters flaunting their hot bods and jet-setting life on social media.

Unfortunately, the music career of the Beijing-based duo has been overshadowed by romance and plastic surgery rumours.