He recently made the news for announcing plans to buy out iconic American pop-culture magazine Rolling Stone, but Mr Kuok Meng Ru, a 29-year-old Singapore permanent resident, is keeping mum about whether the deal has been done.

Speaking at the launch of the new flagship store of music retailer Swee Lee at The Star Vista, all he would say was that things have been going well between him and Rolling Stone publisher, Mr Jann Wenner.

"We have a very good relationship and that's true," he told The Straits Times and declined to comment further.

BandLab Technologies, a music-based company where Mr Kuok is chief executive officer, acquired a 49 per cent stake from the magazine's parent company, Wenner Media, last year. He announced last week that he was keen to buy out the remaining 51 per cent which Mr Wenner and his son Gus put up for sale in September.

Rolling Stone, co-founded by Mr Wenner in San Francisco in 1967, has a monthly reach of 60 million through its print and online presence. 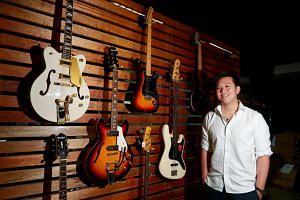 The son of one of Asia's richest men, Mr Kuok Khoon Hong, he acquired Swee Lee, formerly a family business started in Singapore in 1946, and became its managing director in 2012, three years after he graduated from Cambridge University. He is a Malaysian citizen and was born in Singapore.

Swee Lee is one of South-east Asia's largest music retailers and distributors. It has 13 stores in Singapore, Malaysia, Myanmar and Vietnam.

The new store is three times the size of the company's previous outlet in The Star Vista.

In addition to music equipment such as guitars, amplifiers, keyboards and DJ equipment, it also stocks vinyls and apparel. The space also houses teaching rooms for the Swee Lee Music Academy and a cafe dubbed the Swee Lee Social Club.

While Swee Lee is moving towards a "music lifestyle experience" for consumers at its retail stores, Mr Kuok Meng Ru said that he will continue to keep prices competitive, whether through the physical shops or through their website. "It's very important to us to make sure that our prices are very aggressive."

Meanwhile, BandLab, his cloud-based music app in which users collaborate on music online, is seeing a quick rise in the number of users.

Said Mr Kuok: "In July 2015, we had less than a thousand. We crossed a million users earlier this year and we just crossed two million in the last couple of weeks. It's been faster than we expected."