NORRISTOWN, Pennsylvania (NYTimes) - Bill Cosby's lawyers began a combative defence of the entertainer at his sexual assault retrial here Tuesday (April 10), portraying Cosby as the lonely victim of a desperate "con artist" with financial problems who was steadily working her famous mark for a big payday.

Thomas A. Mesereau Jr., one of Cosby's lawyers, shredded any sense that the defence would be cowed by the #MeToo moment. He presented Cosby's accuser, Andrea Constand, in his opening remarks to the jury as a wilful, greedy woman who ran a "pyramid scheme" and took advantage of a man who had lost a son.

"You are going to be asking yourself during this trial, 'What does she want from Bill Cosby?' and you already know the answer, 'Money, money and lots more money,'" he said."She has a history of financial problems until she hits the jackpot with Bill Cosby," he added.

Constand, 44, will present her very different version of events when she takes the stand in coming days.

She has accused Cosby, 80, of befriending her, winning her trust and plying her with gifts before finally drugging and sexually abusing her at his home near Philadelphia in 2004 when she was an employee of Temple University, his alma mater. Her account will be accompanied by testimony from five other women who say Cosby also drugged and sexually abused them, accusations so similar to Constand's that prosecutors say they demonstrate a predator's signature pattern of assault.

In the first trial, last summer, only one additional accuser was allowed to add her voice. That trial, also at the Montgomery County Court of Common Pleas, ended with a hung jury.

In an opening statement of close to an hour, Mesereau attacked the credibility of Constand, turning on its head the prosecution's charge that Cosby was a celebrity stalking a much younger woman for sex. Instead, Mesereau said, Cosby was a foolish man who had made the mistake of telling her his troubles, including the death of his son, Ennis, who was murdered in 1997 in a failed robbery attempt. 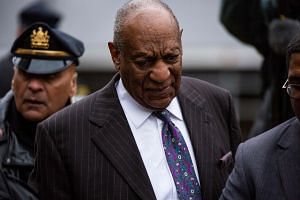 Constand's acceptance of his invitations and gifts during a period of friendship of several months were the acts of a calculating woman intent on insinuating herself into his life, the defence said.

"He was lonely and troubled and he made a terrible mistake confiding in her what was going on his life," Mesereau said.

The defence plans to call as a witness a Temple University academic adviser who, Mesereau said, would testify that Constand told her several years ago that she could make money by falsely claiming she had been molested by a prominent person. The adviser, Marguerite Jackson, 56, was not allowed to speak at the first trial after Constand testified that she did not know her. But the defence has since brought forward two former Temple colleagues of Constand who said she and Jackson did know each other.

Constand first reported an assault to police in 2005, a year after her encounter with Cosby. When prosecutors declined to bring charges, she brought a lawsuit against him. Prosecutors in Montgomery County filed the current charges after reopening the investigation in 2015.

On Monday, the opening day of the trial, prosecutors revealed that Cosby had paid Constand US$3.38 million as part of a confidential settlement of the lawsuit in 2006. The amount had never been disclosed publicly, but Cosby agreed to reveal it during pretrial discussions.

The defence argued that the large payment is by no means an admission of wrongdoing on Cosby's part, but rather evidence of Constand's financial incentive in pursuing charges against him, a perspective prosecutors vehemently reject.

A lawyer who represented Constand in the civil case, Dolores M. Troiani, rejected Mesereau's characterisation of her client, calling it a "disgrace" that the legal system permits such defences which, she said, deter women from coming forward to report sexual assault.

"This is about one thing only," Troiani said. "He gave her pills, she was incapable of consent, he sexually assaulted her, and he admitted it."

As at the first trial, the defence on Tuesday told jurors about how Constand continued to have contact with Cosby after the night she said he assaulted her, including multiple phone calls and an occasion when she went with her family to see him perform in Canada.

Mesereau said that the defence had evidence that Constand had unpaid bills during her time at Temple, was struggling at her job and that they would produce emails showing she was running a "pyramid scheme" at the university. He did not elaborate.

More than 50 women have levelled accusations of some kind of sexual misconduct against Cosby in recent years, but Constand's is the only case to result in criminal charges.

In many quarters the accusations have all but undone the entertainer's image as America's Dad. He faces three counts of aggravated indecent assault, each punishable by up to 10 years in prison.

Mesereau said the experience had been "brutal" for Cosby and he was glad to finally be able to get a chance for vindication.

"This is no longer a media sound bite," Mesereau said. "This is a court of law. Finally we welcome the opportunity for the truth to get out. Finally Cosby has his day in court." Mesereau referred to the #MeToo movement in his statement, asserting that prosecutors were hoping that, "Maybe in the current climate you will not see the facts." But he said he was confident the jurors would find Cosby not guilty.