The cast of Better Days can look forward to the best outing - among all rivals - at the Hong Kong Film Awards after it picked up a leading 12 nominations.

The film, about a schoolgirl who is a victim of bullies, is recognised with nominations in all the prestigious categories - best movie, best director (Derek Tsang), best actor (Jackson Yee), best actress (Zhou Dongyu) and best screenplay.

According to the screendaily portal, Better Days, which was yanked out of the Berlin film festival last year, reportedly because of Beijing's unease over the bullying subject matter, eventually made more than US$200 million (S$278 million) when it was released in China.

Poverty melodrama I'm Livin' It is in close pursuit with 10 nods, including best film and best actor for Aaron Kwok.

In the race for best actress, Zhou and other nominees will likely benefit from a splitting of votes for Cheng who also got the nod for another film, Fatal Visit.

But fans will not be able to cheer on their favourites at the awards ceremony, which has been ruled out because of the coronavirus outbreak.

The organisers said a ceremony is risky since about 400 staff will have to work together to pull it off.

According to The Standard, the event will now be recorded and broadcast in May. 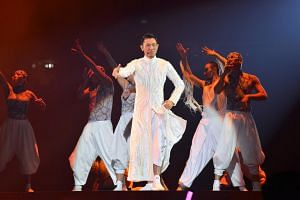 Here are the nominees.

The New King Of Comedy

Kiwi Chow Kwun-wai (Beyond The Dream)

Louis Koo (A Witness Out Of The Blue)

Cecilia Choi Si-wan (Beyond The Dream)