LONDON - The BBC is not banning Michael Jackson's songs, the British broadcaster said, refuting a report in The Times.

The newspaper reported on Sunday (March 3) that his music had been "quietly dropped" in the run-up to Wednesday's (March 6) BBC airing of the documentary, Leaving Neverland.

The documentary, whose first of two parts aired on cable channel HBO in the United States on Sunday (March 3), alleges that the King of Pop sexually molested two men when they were young.

"The BBC does not ban artists," a representative told Variety. "We consider each piece of music on its merits and decisions on what we play... are always made with relevant audiences and context in mind," she said.

The documentary, whose second part aired on HBO on Monday (March 4), has drawn mixed reactions.

Still, Cumulus, the second-largest radio network in the US, is playing it safe, allowing individual stations to decide whether to plug Jackson songs. 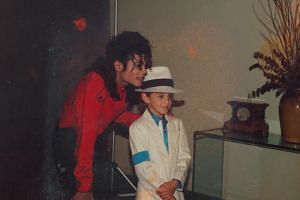 Meanwhile, fans of Jackson, who died in 2009, have gone into overdrive to protect his reputation.

Advertisements for MJInnocent.com on buses in London and digital billboards in the US are proclaiming: "Facts Don't Lie. People Do", reported The New York Times.

Dan Reed, director of Leaving Neverland, said his company had been swamped by a "deluge of hatred".

Oprah Winfrey, whose network was set to air an interview with him and Jackson's accusers on Monday (March 4), has also come under fire.

One fan tweeted: "@Oprah you're disgusting... a cheap mercenary."