The Republic is sucked up into spaceships and dumped on Europe in Independence Day: Resurgence

Yes, what you thought you saw in the trailer does happen: Singapore is indeed churned into confetti, then sucked into spaceships in Independence Day: Resurgence.

Not only that, the Singa-pieces are moved west. Far west.

Or, as director Roland Emmerich explains: "The idea is that Asia gets sucked up and dumped on Europe." 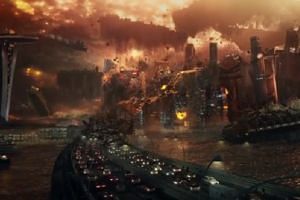 That scene is an homage to a place he knows well.

"I like Singapore, it's a cool city," says the boating enthusiast, who cruises between the Republic and Thailand regularly.

The Germany-born, Los Angeles-based maker of big-budget disaster movies made the obliteration of national landmarks a movie must-have with Independence Day (1996). The predecessor of the new movie notably featured the iconic destruction of the White House. Emmerich carried on the theme of metropolitan mayhem in The Day After Tomorrow (2004) and 2012 (2009).

Journalists around the world ask me, 'Hey, why don't you blow up my city?'

INDEPENDENCE DAY: RESURGENCE DIRECTOR ROLAND EMMERICH on obliterating national landmarks having become part of his identity as a film-maker

So much so that it has, he says with some regret, become part of his identity as a film-maker.

"Journalists around the world ask me, 'Hey, why don't you blow up my city?'," he says. He has a home in London and loves the city and that is why audiences see landmarks such as the London Eye and Tower Bridge bite the dust.

The aliens who chewed up Earth two decades ago return this year, but the same cannot be said of all of the cast. Bill Pullman, Jeff Goldblum, Judd Hirsch, Brent Spiner and Vivica A. Fox reprise their roles. However, Will Smith, a sitcom favourite who became a global movie star through Emmerich's 1996 blockbuster, is missing.

"We wanted to bring back the original cast for the sequel. But two years ago, we thought, 'Gosh, why don't we make a movie for the new generation?'," Emmerich tells the press in Sydney, Australia. He was there earlier this month on a press tour. Independence Day: Resurgence opens in Singapore tomorrow.

So the new film features young actors such as Liam Hemsworth and Maika Monroe, playing the children of people whose lives were touched by the 1996 alien attack.

"I was disappointed that Smith isn't back. I wrote two scripts for him," Emmerich says. The 60-yearold film-maker blames bad timing for the actor not participating.

There are rumours that Smith passed because producers could not meet his fee, but Emmerich explains that the actor had just finished his father-son space survival story After Earth (2013), released just after Men In Black 3 (2012). The star passed on the alien-invasion sequel because he felt he was doing too many sciencefiction movies in a row.

In the new movie, Smith's Captain Hiller is dead and wife Jasmine (Fox) picks up the pieces with son Dylan (Jessie Usher), a fighter pilot like his father. Former president Thomas Whitmore (Pullman) has a daughter Patricia (Monroe), who also has a role to play in stopping the invasion.

Earth just before the second attack is a liberal utopia. Communal strife is a thing of the past as mankind is united in defence of the planet. The military outpost on the moon is run by China, for example, with Hong Kong-based actress Angelababy playing a fighter pilot. Also, President Elizabeth Lanford (Sela Ward), the American commander-in-chief, is a woman.

Emmerich says he had black presidents in the climate-disaster film 2012 and the action-thriller White House Down (2013), played by Danny Glover and Jamie Foxx respectively, so it seemed like a naturalstep.

"I've always been a supporter of Hillary Clinton, so now I play the woman card," he says, grinning.

The 26-year-old younger brother of Thor actor Chris Hemsworth says he knows that his part is an archetype, seen in characters similar to Smith's Captain Hiller in the first movie, or any number of other action films.

But there is a twist to the personality of fighter pilot Jake Morrison, he says.

"We didn't want him to be the typical cool pilot guy. I made an effort to make him self- deprecating, a bit of a goof.

"He's more like Han Solo (from the space adventure Star Wars) - he knows he's got the skills, but he's a regular guy and makes mistakes. He does stupid s***."

Alumnus Goldblum says that this month he will be travelling around the world to cities hosting 20th anniversary parties for the first movie which, to date, has grossed more than US$800 million (S$1.07 billion) worldwide. It created a boom in bombastic Earth-in-peril flicks, spawning the likes of Armageddon (1998) and Deep Impact (1998).

"We will be in London, Berlin, Mexico City, Dubai and Japan," he says.

For the 63-year-old actor, watching his younger self onscreen is instructive, as he remains "a humble student of acting".

"It's deceptively simple - it's just pretending - but to do it in the best way requires a lifetime's pursuit," he says.

He adds that the over-the-top ingredients audiences take for granted today - the scenes of large-scale destruction and global annihilation brought to life by special effects - were a relatively new idea in 1996.

"We knew very little then. Whether anyone would take to it was anybody's guess. It was while we were doing press for it that the studio began to get an inkling that we had a ticket to ride."