CANNES (France) • An emotional Alain Delon received a prize for his six-decade acting career on Sunday as the Cannes Film Festival shrugged off criticism prompted by his contentious views to give him an honorary Palme d'Or.

Delon's heart-throb good looks and roles in major movies throughout the 1960s and 1970s made him an icon in France. He was received with a rapturous standing ovation by the crowd at a special ceremony at the festival on the French Riviera.

The decision to honour the 83-year-old French actor has been controversial, particularly outside France, sparking an online petition in the United States which achieved more than 25,500 signatories.

"One thing I'm sure about is that if there's something I'm proud of, really, the only thing, it's my career," he told the gala. "And this Palme d'Or was given to me for my career, for nothing else, and that's why I'm happy and pleased and satisfied."

Delon, who received the prize from his daughter, actress Anouchka Delon, has starred in films including Luchino Visconti's The Leopard, which won the top prize at Cannes' cinema showcase in 1963.

Delon has inflamed public opinion over the years, including by declaring his friendship with French far-right politician Jean-Marie Le Pen, and has admitted to slapping women. 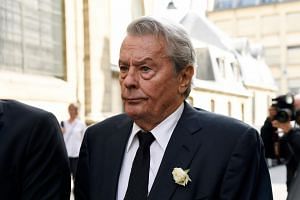 Earlier on Sunday, he stood by some of his views in an interview with France's Le Journal Du Dimanche and said other comments attributed to him had been distorted, as he added that as an actor, he was irreproachable.

"I said I'd slapped a woman? Yes. And I should have added that I've received more slaps than I've given. I've never harassed a woman in my life. They, however, harassed me a lot," he was quoted as saying.

He also said he was "right-wing, full stop" and not a supporter of the far-right.

In the wake of the #MeToo movement to demand greater respect and representation for women, which erupted following a wave of sexual-harassment scandals that rocked the movie industry, the prize for Delon sparked questions over its timing.

"The festival has really tried to make great strides with its organisation and... this year, it doubled the number of women in competition," said Ms Rhonda Richford, a Hollywood Reporter journalist based in France. "And so I think that doing that on one hand and turning around and giving this just shows an error in judgment."

Cannes' festival organisers defended their choice, saying Delon is "not perfect", but is being recognised for his acting career.

A version of this article appeared in the print edition of The Straits Times on May 21, 2019, with the headline 'Alain Delon honoured at Cannes as festival shrugs off criticism'. Subscribe
Topics:
More
Whatsapp Linkedin FB Messenger Telegram Reddit WeChat Pinterest Print Copy permalink