It was a scene the ethereal Little Dragon Girl, the Xiao Long Nu character Michelle Chen played on the 2014-5 TV series The Romance Of The Condor Heroes, would likely approve of.

As wedding guests threw flower petals amid dry ice smoke, the bride sailed down to meet her beau, who was waiting on the hotel banks. Music from the Detective Conan manga series which Chen Xiao watches every night, played.

The actor, who played her swordsman lover Yang Guo in the Condor series, wore a black Dolce & Gabbana suit while his bride, 33, donned a white Alberta Ferretti gown. 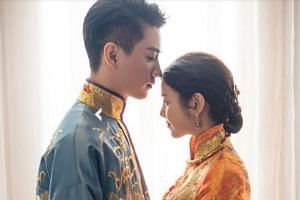 During the rings and vows exchange ceremony, he wiped away her tears, saying: "As I always say before I board a plane, I will love you forever."

The pair, who wed in China on July 5, exchanged kisses when they met the press later. Chen Xiao, 29, said his wife's pregnancy is an accident, as they had planned to wed a year after he proposed last September.

The pair donned traditional costumes earlier in the day for the Chinese wedding ceremony.

Michelle Chen, of 2011's You Are The Apple Of My Eye fame, wore an orange bridal kwa from Chinese designer Guo Pei, while he was in a blueish one, also from Guo Pei.

Hong Kong actress Gillian Chung was one of the bridesmaids, and the groomsmen included Zheng Guolin, who played Guo Jing in the Condor series.