Bella Thorne is exposing a hacker's threat to release photos of the actress-singer in the nude.

But the 21-year-old is not giving in to his demands, choosing instead to post the topless pictures herself on Saturday (June 15).

"For the last 24 hours, I have been threatened with my own nudes," she tweeted, along with screenshots of text messages from the hacker.

"I feel gross. I feel watched, I feel someone has taken something from me that I wanted only one special person to see. I can sleep better tonight knowing I took my power back," Thorne wrote defiantly.

"U can't control my life, u never will. For too long, I let a man take advantage of me over and over and I'm sick of it. I'm putting this out because it's my decision now u don't get to take yet another thing from me.

"Here are the photos he's been threatening me with," she added, revealing that in "the last 24 hours, I have been crying instead of celebrating my book while doing my book (promotion)."

She was in New York over the weekend to plug The Life Of A Wannabe Mogul: Mental Disarray which tracks her personal problems and wild-child lifestyle.

The former Disney star, who has said she was sexually abused as a child, hit back with a warning to the hacker: "Oh yeah, the FBI will be at your house shortly."

According to the Hollywood Reporter, the hacker backed up his threat by sending her nude photos of other stars.

Thorne, after her initial angry outburst, is now in a mood to help him.

"This kid sounds like he's 17... we make mistakes, and this mistake is a bad one. But I don't want some 17-year-old's whole life ruined because he wasn't thinking straight.

"Plus, he's obviously smart so if he got on the right side of the tracks, he could actually possibly help our community and be an alliance.

"You can't always tear someone down for their bad sides but more so build up their good sides."

Thorne herself has drawn criticism over her upfront disdain for people she does not like, though she has said she does not want to put on a mask to disguise her true feelings. 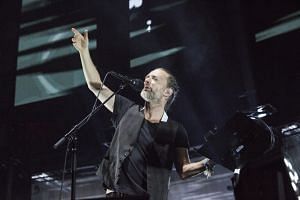 Her decision to stand up to the hacker mirrors that taken last week by British rockers Radiohead.

Radiohead defied them by opting to sell the music online, with proceeds going to the Extinction Rebellion pro-environment group.