SINGAPORE - While many people in the know have chosen to remain silent on the feud between local veteran actresses Hong Huifang and Pan Lingling, there are also artists and fans who have taken sides on social media.

Actress Julie Tan, 25, posted an angry rant in an Instagram story that appears to be directed at Pan. She wrote: "To the one talking s*** about me, you know what, f*** you. I used to respect you cause you're a qianbei (Chinese for senior), but now sorry lost all respect."

Instagram stories disappear after 24 hours but netizens have captured screenshots of it.

Tan was dragged into this saga because Pan had allegedly made some comments about Hong's son Calvert Tay and his rumoured relationship with Tan. Allegedly, Pan had suggested that Tay should get himself inoculated against sexually transmitted diseases.

According to Lianhe Wanbao, Pan has since apologised to Tan's mother for slandering her daughter.

Hong, when approached at the Michelin gala dinner for a comment on Wednesday evening (July 25), refused to comment on the spat, saying: “I don’t want to comment on this any further because otherwise it will never end.”

He added a Chinese saying: When one gossips, one does not hurt the reputation of others, but one's own credibility.

Hong's children had something to say on their own social media accounts as well. 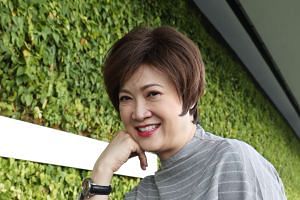 Calvert, 18, wrote in an Instagram story: "I don't care who you are, I don't care what you do, you can hurt me, but don't ever hurt my family and the people I love, I will not tolerate it!"

His elder sister Tay Ying, 22, also wrote in an Instagram post, which she has since deleted: "No one hurts my family. No one."

Pan had allegedly made some hurtful comments about her past relationship.

Fans have also taken to social media to air their views.

Instagram user @dneted commented on Hong's recent Instagram post about "going forward in an honourable way": "Support u. This kind of friend who keep attacking u! What kind of friend is this?! She got problems look for u. No problem, treat u like dirt and attack your family. Evil character she is!"

However, user @thelightintheskai felt that Hong went too far in openly severing ties with Pan: "No one fault her for protecting her children. But dont need to make things so ugly for both families, but of course, some people likes (sic) publicity."