HONG KONG - Hong Kong star Andy Lau has posted a cryptic message in an apparent response to news that his wife is expecting their second child.

"To speculative news, I have always responded by saying, 'No comment. Thank you for your concern', so I have chosen to use words here to clarify things...

"So, simple and clear: Not yet!" he wrote on his official website, seemingly debunking Next magazine's March 30 report that Carol Choo, who turns 50 today, is four months pregnant.

As his post came hours after he lost the Best Actor prize to Aaron Kwok at Sunday's Hong Kong Film Awards, Lau, 54, hastened to add that he was not referring to that loss. 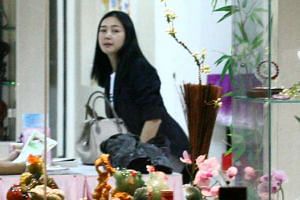 Asked by reporters about the rumoured pregnancy on Sunday, he had answered, "(Whether the news is ) True or false, I have always not responded. If it is true, I will announce it on my website."

In his post on Monday, the actor, known for his privacy, also described "a night" when he received congratulations from smiling friends, colleagues and media pals, reported Ming Pao Daily News.

"Fans wildly congratulating me," he said, but added, "Thank you for your congratulations. If the dream comes true, I must surely share. Having become an artiste like myself, who needs more?"

Lau was 50 and his wife was 46 when they had a daughter Hanna, who turns five next month.