MUMBAI (AFP) - Bollywood's answer to Pirates Of The Caribbean, the star-studded Thugs Of Hindostan sails into cinemas today (Nov 8), battling British colonisers on a quest for loot and box-office records.

This year's big release for India's Diwali festival, the seafaring song-and-dance fest with superstars Aamir Khan and Amitabh Bachchan cost US$42 million (S$58 million), making it the most expensive movie to date in the Hindi-language industry.

Filmed in India, Thailand and off the coast of Malta, it brings together for the first time Bachchan and Khan, two of Bollywood's most bankable stars, in battles against the British East India Company in 1795, and with stunts and pyrotechnics galore.

"But story-wise, there is no similarity between the two films," Khan said.

His previous films, including Dangal, Dhoom 3 and Secret Superstar, have amassed millions across India and beyond, including in China.

Trade analysts believe Thugs will take in more than US$15 million over the long Diwali weekend, a highly auspicious time for India's majority Hindu population. 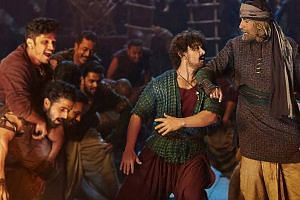 Movie review: Thugs of Hindostan is a perfect confluence of two Bollywood greats in a blockbuster

"The move has hype, hysteria, scale and stars some of the biggest Indian superstars and has a holiday weekend to do humongous business," analyst Akshaye Rathi said.

"It will easily be one of Hindi film industry's highest grossers with Aamir and Amitabh's star power and will set new records."