LOS ANGELES (AFP) - Popular musical romance A Star Is Born -featuring the powerhouse duo of Bradley Cooper and Lady Gaga - leads the field for Sunday's (Jan 27) Screen Actors Guild Awards, which are seen as a major predictor of Oscars success.

This year, the SAG Awards comes at a key point in the race to next month's Academy Awards - just after the Oscars nominations, and before the voting for the winners begins.

The Screen Actors Guild accounts for a major percentage of the 8,000-odd Oscar voters, so the SAG winners crowned Sunday at the Shrine Auditorium in Los Angeles will earn a lot of awards season momentum.

A Star Is Born, the latest iteration of the classic Tinseltown story of an aging star and the ingenue he discovers, earned four SAG nominations for Cooper, Gaga, Sam Elliott and best ensemble cast - the top prize.

BlacKkKlansman, Spike Lee's latest film, is just behind with three and could spark a surprise, pundits say, due to the great respect for the veteran US director among Hollywood's actors.

And superhero juggernaut Black Panther could pull a major upset in the best ensemble category - giving its star-studded cast the chance to give the signature "Wakanda Forever" salute from the stage.

One major absence at the 25th edition of the starry event is Alfonso Cuaron's Roma - the top Oscar nomination getter was left out of SAG contention. 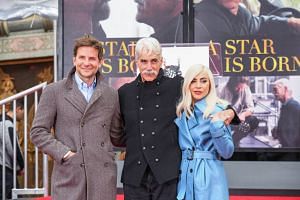 "A Star Is Born could win big, setting it up as once again the season's frontrunner. Bohemian Rhapsody could win - yes, even still," Stone wrote on her website, Awards Daily.

But she ultimately put her money on BlacKkKlansman, which is based on the true story of a black cop who successfully infiltrated the Ku Klux Klan with the help of his white partner, who acts as his surrogate.

She notes it's the only film to earn nominations at all the major awards shows and in the key categories, while acknowledging: "We all must agree that it's a weird year and stats don't matter." .

Sure bets and toss-ups

In the individual races, best actress is seen by industry experts as a near-lock for Glenn Close, who has taken home a Golden Globe and a Critics' Choice Award so far for her work in The Wife.

Outside contenders are Gaga and Olivia Colman, who wowed critics with her portrayal of Queen Anne in the offbeat royal romp The Favourite. For best actor, Christian Bale's disappearance into the role of former US vice president Dick Cheney in "Vice" is seen as the one to beat.

But Rami Malek's star-making turn as Queen frontman Freddie Mercury in "Bohemian Rhapsody' earned him a Golden Globe, an Oscar nomination - and a chance to win on Sunday.

In the supporting acting categories, Mahershala Ali ("Green Book") is expected to continue his march to the Oscars, but the actress trophy is a toss-up, as early favorite Regina King ("If Beale Street Could Talk") is not nominated.

Many have since put their money on Amy Adams, who plays Cheney's wife Lynne in "Vice." While SAG-winning casts have only gone on to win a best picture Oscar about half the time, the awards are better at predicting best actor winners (79 percent) and best actress (75 percent).

In the television categories, shows will look to build up some momentum ahead of the Emmys later this year.

Those include new Netflix comedy "The Kominsky Method" starring Michael Douglas and the streaming giant's returning dark drama "Ozark." Perennial favorites such as Amazon's "The Marvelous Mrs Maisel," powerhouse FX drama "The Americans" and NBC family drama "This Is Us" are also in the mix.

Tom Hanks will give a lifetime achievement award to veteran actor Alan Alda, the star of the long-running TV comedy "M*A*S*H" who revealed last year that he is battling Parkinson's disease.

The lineup of presenters includes a who's who of the nominees - from Cooper, Gaga and Elliott to Chadwick Boseman and Angela Bassett from the "Black Panther" cast.