WASHINGTON • Armie Hammer was sitting in a hotel room, in the middle of telling a story, when his publicist coughed. Loudly. He stopped talking and looked at her.

"What?" he asked, grinning innocently. "What?" He was not sharing a controversial anecdote.

But the need for a signal would not be a surprise. Hammer, who has become a Hollywood and Internet-favourite star over the last several years, has developed a reputation for having little filter, especially on social media.

How often do celebrities say what they are really thinking, even when it gets them into trouble?

The stakes are high for Hammer, 32, steadily rising through the fame ranks with an eclectic career, from big studio pictures to indie films to biopics. He was in Washington to promote On The Basis Of Sex, released on Christmas, inspired by a true story of a young Ruth Bader Ginsburg (Felicity Jones) and her work on a groundbreaking tax case that changed how the courts viewed gender discrimination.

Hammer is in the co-lead role as her husband, tax lawyer Martin Ginsburg, who brings her the case.

Basically, it is difficult to typecast Hammer as anything except Extremely Good-Looking Guy Who Can Really Wear A Suit.

During the On The Basis Of Sex red carpet walk, Jones joked she even saw 85-year-old Supreme Court Justice Ginsburg's eyes "light up" when she saw him. 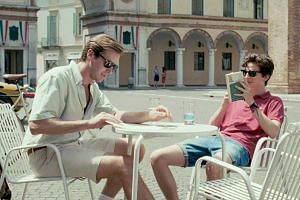 Gentle first love in Call Me By Your Name

Hammer is aware of this and, as a result, seems especially enthusiastic when he turns up in the opposite of what people may expect.

He had a critically acclaimed turn as an evil boss this year in Boots Riley's dark comedy Sorry To Bother You. "There was no constraint, there was no, 'Okay, you just have to be the charming, funny, handsome guy' or whatever," Hammer said.

"It was like, 'Now you get to be a maniac, you can just go nuts, whatever you want to do is okay'."

Hammer, the great-grandson of an oil tycoon, grew up in the Cayman Islands and Los Angeles. He dropped out of high school with dreams of becoming an actor.

After a few TV parts, he landed his breakout role in 2010 playing Mark Zuckerberg nemeses, the Winklevoss twins, in Aaron Sorkin's The Social Network.

Afterwards, he played everything: the prince in the Snow White retelling Mirror Mirror (2012); a slave owner in The Birth Of A Nation (2016); FBI director J. Edgar Hoover's deputy in J. Edgar (2011); and a graduate student who falls for the son of his Italian host family in Academy Award best picture nominee Call Me By Your Name (2017).

Hammer had not gravitated towards wildly different parts on purpose, and that it was "an illusion" that any actor had control over his career.

However, he is careful about what he does not want to do. "Maybe this is just a naive take on my part, but I've always felt like it's okay to say no if you don't respond to something," he said. "You feel like you almost have to pay karmically for every cent that you earn if you're not really invested in the project.

"I can think of only maybe one time in my career where I wanted to say no and didn't, and I really didn't enjoy myself."

Unlike some actors who claim they do not pay attention to criticism, Hammer is tuned in.

He blamed the failure of The Lone Ranger (the 2013 big-budget flop with Johnny Depp) on critics.

And he made headlines last year for critical tweets to BuzzFeed reporter Anne Helen Petersen, who scrutinised his career in a lengthy piece titled 10 Long Years Of Trying To Make Armie Hammer Happen.

He had another Twitter incident recently after the death of comics icon Stan Lee, as he critiqued a trend of performative grieving on social media.

"So touched by all the celebrities posting pictures of themselves with Stan Lee. No better way to commemorate an absolute legend than putting up a picture of yourself," Hammer tweeted.

After much criticism, he deleted the post and apologised: "While attempting to provide some unnecessary social commentary about the current selfie culture, I inadvertently offended many who were genuinely grieving the loss of a true icon."

When asked about what he learnt from the incident, Hammer paused before answering carefully.

"I think that there is a wrong way to be right," he noted.

The coughing publicist cut in before he could say anything else.

A version of this article appeared in the print edition of The Straits Times on January 03, 2019, with the headline 'A rising star who often courts controversy on social media'. Subscribe
Topics:
More
Whatsapp Linkedin FB Messenger Telegram Reddit WeChat Pinterest Print Copy permalink