LOS ANGELES (WASHINGTON POST) - "Star Wars: The Last Jedi: De-Feminized Fanedit" is a divisive film, even within the community of men's rights activists for whom it was made.

Some appreciated the recut, which pares the run time of the two-and-a-half-hour "Last Jedi" down to 46 minutes by deleting "most shots showing female fighters/pilots and female officers commanding people around/having ideas," as its creator explained in, uh, let's call it marketing material.

Amateur reviewer Jay A. York, for one, enthusiastically endorsed the film to his 38 YouTube subscribers after it was released on torrent networks this weekend.

Others found the remake mystifying for the same reasons - even some who sympathised with the effort to turn a plot in which women who become Jedi, sacrifice themselves, and lead armies into a film where most women never speak, if they're seen at all.

As a self-professed men's rights empathiser on Reddit observed, the recut "just makes no sense."

Its production flaws become apparent a few seconds in. The iconic opening crawl has been censored so that the name of the leader of the Resistance, General Leia Organa, is removed from the text. Her rebellion has become a generic "RESISTANCE".

Ironically, the creator forgot to remove Leia's name from the Chinese subtitles that scroll across the frame for the entire length of the remake - an unavoidable legacy of the camcorder bootleg from which "Fanedit" appears to have been made.

Subtitles notwithstanding, Leia - actress Carrie Fisher's final film role before her death in 2016 - has been removed entirely from the recut's opening battle between the First Order and the Resistance at D'Qar, where she censures and demotes "mansplaining" flyboy Poe Dameron (Oscar Isaac) for a risky attack that cost many (male and female) lives.

"The intro sequence is now very watchable and actually much cooler without all of Leia's nitpicking," the recut's creator wrote.

Unfortunately, the general's absence also makes the fight incomprehensible. It's unclear who the protagonists are even supposed to be until the film is a quarter way finished. 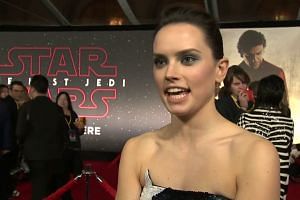 Women take up main roles in The Last Jedi 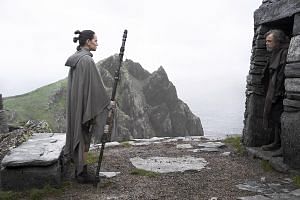 In one of many lurching cuts, "Fanedit" blinks from the battle at D'Qar to the planet Ahch-To, and for the first time shows a woman doing anything besides taking orders from or staring silently at men.

Luke Skywalker is somehow in the middle of training Rey (Daisy Ridley), the heroine of Star Wars: The Force Awakens who has come to train with the Jedi master. (A huge portion of the original movie, in which Luke confronts his emotions and reluctantly decides to help Rey, has been deleted in the name of manliness.)

Rey mostly just waves her lightsaber around in the air while Luke talks at her.

"She now seems more graceful and real to me," the anonymous creator wrote of this particular edit.

After Luke spends a few minutes telling Rey about heroic things he did in past episodes of the franchise, we cut back to space where Leia's son, Kylo Ren, blows up her ship. In the original film, Kylo actually doesn't have the heart to fire on his mother, and leaves the job to another bad guy. The film's central villain is "more badass and much less conflicted" in the new version, the creator explained.

After the explosion, we see Leia floating lifelessly through space. In the original film, as The Washington Post's Michael Cavna wrote, Leia's unexpected resurrection made audiences - in wide-ranging responses - cheer, weep, gasp and laugh in their seats.

Her coma, recovery and victory may have been the movie's most powerful arc - especially in light of Fisher's tragic death during post-production.

In the recut, Leia just dies in space.

That way, the creator explained, she isn't around for most of the movie to scold the closest thing to an alpha male in the Resistance: ace pilot Poe Dameron.

The recut couldn't manage to similarly reconcile Laura Dern's character, the "unflinching vice-admiral in the lavender-tressed" Amilyn Holdo, with the creator's notion of femininity. So the admiral was simply deleted.

In her place, Dameron is conscripted to fill in a plot-critical suicide mission, where Holdo saves her fleeing colleagues by making a hyperspace jump with the Resistance cruiser the Raddus into the First Order's flagship.

Ironically, Poe's death means that his own heroics in "Last Jedi's" finale, where he leads the remaining Resistance fighters to escape, have to be scrubbed out of the remake right along with all the scenes of female bravery. So much for male exceptionality.

What more can we say about "Star Wars: The Last Jedi: De-Feminized Fanedit"?

Rose Tico, whose actress Kelly Marie Tran was harassed by racists after the original film's release, is renamed "Asian chick" in the recut. Her character motivation, including her sister's combat death, has been entirely excised; consequently, nothing Rose does makes any sense." She is just there and occasionally smiles at Finn or screams 'Finn!'" the creator wrote.

And yet the same could be said of the men left behind in this defeminised galaxy. They're just sort of there, reciting lines and making gestures that, despite all the time and effort it must have taken to Frankenstein the scenes together, make little sense in a plot that is still driven by women, whether they're invisible or not.

Even the recut's creator acknowledged the futility of this endeavour: "The flow of the shortened movie is still somewhat coherent. (could be done better, but was lazy)."

And it shows. As we write, a mere 66 people are trying to download "Star Wars: The Last Jedi: De-Feminized Fanedit", which is free.

We don't recommend you join them.