Kimbie Chan, 37, is estimated to be worth HK$50 billion (S$9 billion) thanks to her fugitive businessman husband Joseph Lau, 65, of property company Chinese Estates Holdings. He transferred a substantial part of his assets to her on Wednesday (March 1), citing "a very unstable health condition".

Immediately, rumours surfaced online that he had died shortly after the transfer, but the couple laid that piece of gossip to rest when they showed up at Chinese Estates' headquarters in Wanchai on Thursday (March 2) afternoon.

1. She is named after a cute goldfish

She gave herself the pen name Kimbie after a cute pink goldfish from the Japanese anime series Goldfish Warning! (1991-1992). 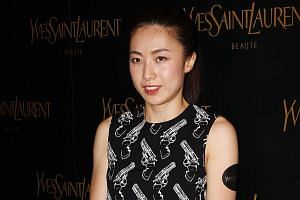 2. She was an entertainment reporter

She joined Apple Daily as an entertainment reporter in 1999 earning HK$10,000 a month and was popular with the stars. Comedian Stephen Chow once pinched her face in public and even met her for meals privately. When he won the Hong Kong Film Award for Best Director for Shaolin Soccer (2001), she accompanied him to the after-awards party and proceeded to spill beer over her see-through white shirt.

At 18, she lived with an Asia Television director and they were together for over a year. After they split up, he reportedly said: "She's too smart, I'm not good enough for her and would have held her back."

Her second boyfriend was a photojournalist and they lived together for two years. It was speculated that they broke up as she was getting close to Mr Lau.

4. She met Lau through work

According to online reports, she met Mr Lau in 2001 through an interview assignment. When she approached him with her camera, he lost his temper and said: "Why are you taking such a close-up picture of me?"

She was unfazed and retorted: "Wah! Are you worried that I will get a shot of your big mole?"

He was impressed by her spunk and they kept in touch after that.

Ms Chan's tenacity as a reporter served her well as she triumphed over several rivals for Mr Lau's affections.

He filed a notice of intended marriage to Ms Chan in November last year, days after he placed front-page advertisements to announce his 2014 break-up with former beauty contestant Yvonne Lui, 37. In interviews with Apple Daily, he denounced Ms Lui's "insatiable" greed, and said that he had planned to marry Ms Chan years ago.

Asked why he was marrying Ms Chan out of all his girlfriends, he answered: "Kimbie isn't greedy. She's simple. She's not a bad woman. She has taken good care of me and my children. She has a kind heart."

Ms Chan has two children with Mr Lau - a son, five, and a daughter, nine. In 2015, Mr Lau made headlines when he paid a record US$49 million (S$69 million) at an auction for a blue diamond for their daughter. Mr Lau has four other children with Ms Lui and his late ex-wife Theresa Poh.