With everything that has been going on around the world recently, it might not feel like Christmas is just over a week away.

But fret not if you feel like you have lost that festive spirit - here are 12 Christmas commercials that will tug at your heartstrings or make you laugh out loud, while touching on important issues in several cases:

1. The one gift Santa can't deliver

As Christmas nears, many children wish for presents such as new toys, gadgets or games.

However, some less fortunate children simply want to see their families again - something that the International Committee of the Red Cross (ICRC) wants to remind people of through its Christmas commercial this year.

Like other Christmas videos, the ICRC's features Santa Claus and festive music.

But unlike many of them, Santa appears in a war zone. His suit is dirtied by ash, and his eyes are hard as cars burn and people flee.

The one gift Santa can't deliver | The Laws Of War

"Happy holidays" echoes over and over again in the background as Santa trudges through the wreckage of a building while men fire rifles at unseen targets.

After nearly getting shot himself, Santa finally stumbles into a room where a wide-eyed girl sits clutching her knees.

He reaches down to take her hand and smiles a tired smile - but in the next scene, the girl is alone in the room, suggesting that Santa was never there at all.

The video ends with an appeal by the ICRC to "help us help more".

2. The nicest Christmas ever

Air New Zealand's 2018 Christmas advertisement is a light-hearted take on current affairs, courtesy of a slip-up by Santa Claus.

In this video, Santa accidentally sends his "naughty list" to a boy. Horrified to learn that he is on the list, the child calls for a summit of "naughty" children around the world.

Some of the children make "kiddy" versions of real-life global pledges. For instance, a boy from Argentina promises to "reduce personal gaseous emissions by 27 per cent".

While many of the "delegates" make positive promises, one stands out - a child dressed in a suit and red tie, wearing a "Make Christmas Great Again" cap, a reference to United States President Donald Trump.

He says: "I have to say, I'm not naughty at all. In fact, I'm the nicest person I know." When the children laugh at him, he adds, "Didn't expect that reaction, but that's okay", mirroring Mr Trump's response to world leaders' laughter at the UN General Assembly in September.

British supermarket chain Sainsbury's casts the spotlight on children in its 2018 Christmas ad.

It features an eight-year-old girl dressed as a star and performing a song on stage. She appears to be nervous when delivering the first few lines of the song, but she overcomes her nerves to deliver the rest of the tune with confidence and a wide smile.

Children dressed in a variety of Christmas staples, including a chain of tinsel and baubles, join her, and the stage opens up to reveal a giant Christmas tree.

A string of Christmas lights runs across the stage and a child dressed as a plug jumps into a "power socket" to light up the stage, as the literal star of the show is lifted to the top of the tree.

The clip ends with the line "we only get what we give", a timely reminder not just for the holiday season, but also all year round.

Loneliness can get to someone far away from home, especially during festive occasions like Christmas.

But in American department store Macy's ad, a woman in a space station gets a warm surprise from home.

She makes video calls to her family while in space, and her daughter asks her if she is taking care of "Sunny", a present.

While the mother is unable to be home for Christmas, her daughter excitedly tells her to open Sunny in a video call after wishing her Merry Christmas.

As she opens the present, styrofoam pellets in the package fly out and swirl about in zero gravity, almost like snow.

Back home, her daughter watches snow fall outside their house.

Inside the package is a snow globe, and the ad frames the woman floating in the space station as if she is in a snow globe herself.

Macy's clip aims to remind people to discover how giving brings people together, no matter how far apart they may be.

This video by Barbour, a British luxury and lifestyle brand, celebrates 40 years of the much-loved Raymond Briggs children's book The Snowman.

The clip has no dialogue at all, leaving the music and the expressions of a precocious girl to convey her thoughts and feelings as she waits for her snowman to come to life.

The tune skips along happily as the girl builds the snowman, pausing at one point in a comical moment as she falls under the weight of a giant snowball she made.

But the music slows dramatically when she is seen waiting for hours in the cold, hoping for some hint of life from her snowman.

The girl's father then brings out a winter jacket - Barbour branded, of course - for her, and as he walks back home, there is a hint that some snowmen really do come to life.

The Heathrow Bears first appeared in a 2016 Christmas ad for Heathrow Airport, and have proved an annual hit. This year is no exception.

This year's clip features Edward and Doris Bair - yes, these bears have names - enjoying their retirement in sunny Florida.

However, things do not go too well when their efforts to have a jolly Christmas fall apart.

A video call with their family back in Britain gives them an idea to catch a flight across the ocean to be with their loved ones.

The Bairs' journey home is riddled with adorable moments such as the couple kissing under a sprig of mistletoe while on the plane.

If the squeal-inducing teddies have not already captured your heart, the last scene showing the family reunited will surely move you.

7. The season of good dog

Not to be outdone by the bears, American dog food company Pedigree put out an advertisement that makes a dog the centre of attention.

The video shows Christmas through the eyes of a dog, which understands the festive season - dubbed "the season of good dog" - as one that revolves around itself.

It thinks Christmas trees are in honour of its love of sticks, baubles commemorate its love of fetch and presents are meant for it to enjoy tearing wrapping paper.

When its owner adopts another, more adorable puppy, the original dog worries that everyone will forget about it.

However, it soon learns to share and have fun with its new buddy, and has an epiphany of sorts.

Not all good commercials have to be long. Finnish retail company Stockmann put out an ad that was just 30 seconds long, featuring a magic squirrel.

In the video, a young girl and her father prepare for Christmas festivities. However, the girl's mother is busy at work with meetings and presentations.

The squirrel tries to make the mother come home more quickly by causing a blackout and messing with the clocks in her office.

The commercial ends with the family reunited, with the words "Anna joululle aikaa", which roughly translate to"Give Christmas time".

Australian insurance company NRMA Insurance made family the centre of its ad as well.

In the video, a girl excitedly greets her father after she is dismissed from school for the holidays, only to have him shush her, as he is on the phone attending to work.

During the car ride, the girl's father also chides her as she tries to put a paper reindeer crown on his head.

Finally, the father's phone rings, distracting him from his driving. The girl's stuffed rabbit comes to life and quickly knocks the phone onto the floor of the car.

This causes the father to look up, spot an oncoming car and slam on the brakes to avoid a collision.

The father then appears to realise how obsessed he has become with work, shuts his phone away in the car's glove compartment, and smiles as he puts on the reindeer hat.

The commercial ends with a reminder to drive safely during the holiday season.

Christmas is a time of song, something that health and beauty retailer Boots UK's ad banks on with its simple song lyrics.

The video shows a teenage girl being embarrassed and irked by her mother, as the latter ties her hair wrongly, cries too hard when watching television shows and forces her to wipe off her make-up before she goes out with her friends.

Singing about this embarrassment, the girl croons: "If there's somebody spoiling my fun, she's me mum."

But later, the girl chances upon her mother with a group of carollers in a town square, wearing lipstick and singing proudly.

Seeing her in a different light, the girl buys her mother a tube of lipstick for Christmas with a card that says "keep singing".

And the girl herself sings: "It was her, did you see? Standing there by the tree. Now I can see her stunning and strong, she's me mum."

The ad encourages viewers to celebrate their loved ones "not just for what they do but who they really are".

While the holiday season usually implies fun and fuzzy feelings, a gathering with relatives can get awkward when you are quizzed about your love life or have to make small talk with family members you do not get along with.

Skincare brand Olay explores this with its tongue-in-cheek Christmas musical of an ad.

The clip's protagonist has hatched a "perfect plan of attack" to stave off her nosy relatives' interrogation at a Christmas gathering.

How you might ask? By distracting them with Olay products and singing a catchy ditty extolling their benefits.

The charm offensive works and she wins her relatives over.

Her sister seemingly gets left out as she tries hilariously to grab her family's attention to no avail. But all's well that ends well, and she gets some love at the very end.

The video then becomes a retelling of John's musical career, with flashbacks of his younger self singing the song and almost always with a piano.

Eventually, it goes back to his childhood and shows John playing at a piano recital, before making one last jump to the singer as a small boy running down the stairs in his house on Christmas. 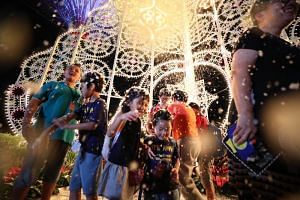 An excited John is greeted by his mother, who helps him unwrap his Christmas present - a piano.

Young John tentatively presses a few keys before the video cuts back to John in the present, sitting at a piano and finishing the song.

The video focuses on the power of a gift to change lives, in the same way that the gift of a piano helped John become a famous singer.