Dietitians and doctors debunk some commonly held beliefs about the fruit

The durian season is in full swing, but those who are also health-conscious may find themselves thinking twice about joining in the feast or holding back.

After all, the fruit has a "bad name", said Ms Bibi Chia, principal dietitian at Raffles Diabetes and Endocrine Centre.

It is said to be fattening, high in cholesterol and "heaty" .

Here, she and her colleagues dissect five commonly held health beliefs about the king of fruit.

1. People with high cholesterol should not eat durian as it can worsen their condition.

The good news is, you won't find a trace of cholesterol in durians.

The durian also contains monosaturated fats, which may help to lower one's level of triglycerides and low-density lipoprotein, or "bad" cholesterol, said Dr Abel Soh, an endocrinologist at Raffles Diabetes and Endocrine Centre.

But, Ms Chia said, the durian also contains a small amount of harmful saturated fat, which is linked to heart disease.

2. The fruit is heaty and can cause coughs and even fever, if you overindulge in it.

It depends on whether you go with the Western or traditional Chinese medicine (TCM) perspective.

"For people whose body constitutions are predisposed to heatiness, overindulgence in durians can induce a phlegmy cough, sore throat and constipation," said Mr Chew, adding that fever may also result.

In Western medicine, said Dr Michael Wong, deputy medical director of Raffles Medical, while it is "scientifically" possible that eating durians causes a slight increase in one's body temperature, this does not constitute a fever or lead to coughs or respiratory infections.

The rise in body temperature is due to metabolic and chemical processes that occur when the body digests the dense fruit, he said. 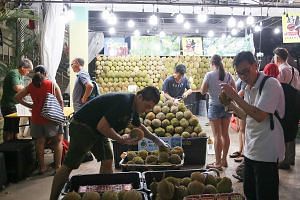 Durian season! 8 alternative ways to consume the king of fruits

3. Eating durian together with alcohol can be lethal, and taking it with milk can be dangerous, too.

Scientific evidence has not conclusively supported this link, said Dr Wong. Instead, some people suffer from heartburn and bloatedness after feasting on durians, due to the relatively high content of fibre and carbohydrate. This may then be worsened by alcohol intake.

"(When such drinks are) taken with durians, which are also warm in nature, these effects are accentuated and can unsettle the body's natural yin-yang balance."

This can aggravate existing medical conditions, such as cardiovascular disease, and pose severe health risks, he added.

4. Pour salt water into the husk and drink from it to regulate the "heatiness" from eating durians.

There is some truth in this - in TCM, salt water is believed to help reduce toxins and heatiness.

"It can moderate the undesirable effects of eating durians," said Mr Chew. But there is no need to drink it from the durian husk.

5. Diabetics can eat durians without much worry and the fruit does not taste sugary.

The fruit actually has a high sugar content, so people with diabetes will need to be careful how much they eat.

The flesh around three durian seeds can contain between 20g and 30g of carbohydrates, said Dr Soh. This is equivalent to the amount of sugar in half a can of regular Coke (20g) or a bowl of white rice (30g).

Ms Chia said diabetics should limit their durian intake to just one or two seeds a day.