The reefs at Sisters' Islands Marine Park, which were bleached due to rising sea temperatures last year, have since recovered

The beautiful corals at Sisters' Islands Marine Park are back in business.

Last year, they had lost their bright colours due to warming seas, and their habitats had to be closed to divers while they recuperated.

The two dive trails - imagine a nature trail not in a forest but underwater, with stations and signposts - had to be closed in June last year to lessen the corals' stress.

The good news is: in the six months since, the bleached corals have recovered and the trails have been reopened at the end of last month.

They have recovered "most of their colours", says Dr Karenne Tun, director of Coastal and Marine at the National Biodiversity Centre at National Parks Board (NParks).

But water temperatures have returned to below 30 deg C since mid-October and the zooxanthellae have since returned to their homes and restored the bright hues. 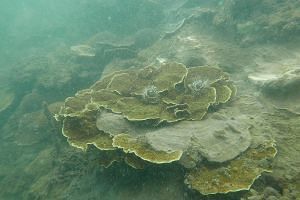 Murky waters help save corals in the short term 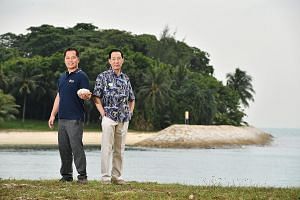 Most people access the park through Big Sister's Island by taking a 45-minute boat ride from Marina South Pier. The boat can take 12 people and a return trip costs $350 for the entire boat.

At the 4.9ha Big Sister's Island, visitors can picnic and take part in intertidal guided walks.

Overnight stays are not allowed as the island is open to the public only from 7am to 7pm daily.

• For more information, go to www.nparks.gov.sg/sistersislandsmarinepark

Recreational diver David Chua, 42, was surprised by the diversity of the corals around Big Sister's Island.

Calling the sight a "coral garden", the chief executive officer at the National Youth Council says: "They came in different shapes and sizes. Some were shaped like a whip, others like a fan."

He was following a dive trail, which is a nature trail not in a forest but underwater, with various stations and informative signboards.

Open to the public in October 2015, the trails are set at different depths to allow divers to enjoy the unique biodiversity of each one.

The Shallow Dive Trail, which is about 4 to 6m deep, features hard corals, some of which were salvaged from reefs in Singapore that were threatened or designated for reclamation.

The Deep Dive Trail, about 10 to 15m deep, showcases more colourful creatures such as seafans, seawhips and sponges which require less light to survive.

Each trail, which goes in a circular loop, is about 100m long and has 10 stations. These are marked by signs with information about the marine life in the waters.

Some stations engage divers in simple biodiversity or water visibility surveys for instance, by getting them to count the number of fish between two markers or filling in water visibility estimates.

The visibility underwater is estimated to be between 1 and 5m, depending on weather conditions.

Six dive operators have been approved by the National Parks Board to conduct the dives and they must adhere to a code of conduct. For example, they must ensure that their divers do not take, intentionally disturb or touch marine life.

The dive trips take place about two to three times every month. Only eight divers are allowed on each trail at any one time to ensure minimal damage and avoid overcrowding.

The divers get to dive at the shallow trail and at the deep trail, with a break in between.

To go on the dive trip, divers are required to have logged at least 20 dives with one local dive within the past two years and to have a certification beyond entry level from a reputable international training organisation.

Each dive trip, which takes about five to six hours, costs between $130 and $170, usually excluding equipment.

Marketing manager Amelia Tang, 35, is looking forward to getting a photo every six months from the charity she has donated to.

The pictures are not of a goat in Wales or a school-going child in Kathmandu - but of a little coral she has "adopted" for $200 at Sisters Islands Marine Park.

Having always loved the sea, she decided to sponsor a coral when she learnt about the Plant-A-Coral, Seed-A-Reef programme by the park. In 2015, The Deep exhibition of deep-sea animals at ArtScience Museum also made her realise the endangered status of corals from activities such as commercial fishing.

The sponsorship progamme was launched by National Parks Board (NParks) in May last year to encourage people to play a more active role in enhancing the habitat at the marine park.

An individual or organisation can sponsor a coral with a minimum donation of $200.

For every $200 donation, NParks will plant a coral nubbin, a small coral fragment, in nurseries and grow it to a suitable size before transplanting it onto a "Reef Enhancement Unit" in the marine park. The unit is an artificial structure placed within suitable reef zones for marine organisms to grow and for reef fish to seek refuge.

Donors will get a photo update every six months for the next three years on the progress of the reef on the Garden City Fund website. They can also take part in a free intertidal guided walk at the Sisters' Islands Marine Park.

As of Dec 31 last year, more than 50 individuals and corporations have donated more than $190,000, with the highest amount being $1,200 contributed by an individual.

For larger donations of $20,000, NParks will put in place a Reef Enhancement Unit.

So far, nine reef enhancement units have been identified for sponsorship and the HSBC has sponsored all of them, contributing a total of $180,000.

• To donate, go to www.gardencityfund.org/coral/

Whenever her work schedule allows, Ms Mona Tan would hop onto a ferry to Big Sister's Island and join her fellow guides to lead a public walk at the intertidal zone.

A volunteer guide with the Sisters' Island Marine Park for the last 11/2 years, she leads a walk there about once a month.

Ms Tan, 53, a trainer of preschool teachers, looks forward to every trip. She says: "It's a way of catching up with nature. I also enjoy spreading the message of conservation."

The park has about 60 volunteers who help to lead intertidal walks twice a month. Some also help with underwater surveys.

To qualify as a volunteer guide, one has to be at least 18 years old. To learn about the history of the island and its marine life, he needs to undergo a training workshop conducted by NParks. There is also a field trip to gain practical experience.

The training is free, but volunteers have to commit to guide at least three times in the next 12 months.

Having studied environmental biology at the National University of Singapore, she wanted to continue her passion for wildlife conservation after she graduated in 2015.

So when she learnt that the marine park was recruiting volunteer guides in March last year for its intertidal walks, she signed up. She has since led about six or seven walks there.

She says: "It has become a very familiar place to me. I know exactly where to find certain animals and even their shells. For instance, I know that the ornate green leaf slug likes to hide among the seaweeds.

"There is also an area we call the 'graveyard' because a shell, about the size of a laptop, is embedded in the sand. The shell used to house a giant clam."

• To volunteer, go to www.nparks.gov.sg/sistersislandsmarinepark.

From afar, the intertidal area at the Big Sister's Island at the Sisters' Islands Marine Park looks like a boring expanse of mud and sand.

But step closer and one will see something different.

Camouflaged in the sand are brown sea stars making burrows while the pools of water contain wildlife such as black sea cucumbers.

Meanwhile, darting in and about sea anemones are tiny colourful clown fish.

These creatures have adapted to living in the intertidal zone - one of the harshest habitats, says Dr Karenne Tun from National Parks Board.

"At high tide, the sea creatures get submerged in water while at low tide, they are exposed to the scorching sun."

Sea anemones can curl up to retain moisture when exposed to the air during low tide. Some sea snails have an operculum, a tiny lid which closes the shell and prevents them from drying up.

The marine park has been conducting free guided walks for the public to the intertidal area about twice a month since August 2014.

Visitors enter by walking for about 10 minutes towards the left side of the island after disembarking at the jetty.

To sign up for a visit, go to the Sisters' Islands Marine Park website. Each session, which can take about 45 participants, starts at Marina South Pier on the mainland.

There, participants will be met by at least three guides. Visitors do not have to pay for the ferry tickets.

Upon reaching the island, a few of the guides will go first to look for animals at the big and small lagoons. They will then put little flags to mark out where the animals are, or place them in little containers.

Participants, who spend about 11/2 hours on the island, get to see corals, sponges, snails and slugs at the big lagoon.

At the small lagoon, they can also see seagrasses, the only marine flowering plant, which provides a nursery ground for baby fish.

While people can visit the intertidal area on their own, Dr Tun says that it is better to follow a guide.

"If you go on your own, you may not be able to spot the creatures, some of which can be elusive.

"You may also accidentally step on the wildlife and hurt or kill them."

There are also certain hazards in the intertidal area, such as the stone fish, which is often mistaken for a stone. Being stung by one can be very painful.

Ms Grace Chai, 39, a distributor of health products, decided to go on a guided walk to the intertidal area with her husband and two children, aged seven and nine, last December.

She saw sea stars and a black sea cucumber, measuring about 30cm long.

She says: "I didn't know that such marine life exists in Singapore."

• To sign up for a walk, visit the Sisters' Islands Marine Park website at www.nparks.gov.sg/sistersislandsmarinepark and look under "Things to do".