Businessman Gregory Ang, 55, says it was his childhood dream to learn how to pilot an aircraft. But he fulfilled this aspiration only 10 years ago.

When he was 15, he joined the junior flying club here and learnt aeromodelling. Then he wanted to serve national service as a pilot, but failed to meet the eyesight requirement.

While studying arts and media at the University of San Francisco in California in the United States, he joined the varsity flying club and would hop onboard the aircraft of those who had Private Pilot Licences (PPL).

"I couldn't afford to get my own PPL then. I was a starving student," he says half in jest.

His flying interest took a backseat after he came back to Singapore and plunged into working life.

But in 2005, his flying ambition resurfaced after his divorce and starting his own business. He helps entertainment companies launch, market and distribute TV channels throughout the Asia-Pacific. 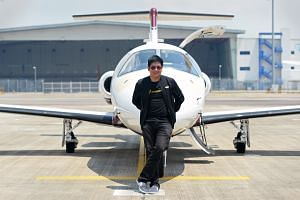 Love is in the air for internet entrepreneur Fabian Lim

"I thought to myself, 'I'm getting older. If I don't do this now, I'll never do it'," he says. "And since I was single, I did not have to ask a wife for time off to do this. I could just go ahead and do something new in my life."

He took a year to get a Malaysian PPL, but he found it "so hard" to rent aircraft to practise his newly acquired flying skills. The flying club in Johor, from which he attained his PPL, had only two aircraft for rental. Each Saturday, he would be queuing with several people for an hour-long flying slot.

Frustrated, he started reading up on aircraft ownership to see if it was a viable option. Before long, he was the proud owner of a second-hand Socata TB-9 in 2007.

He would only say that the four-seater trainer aircraft was "the price of a second- hand car" and that he co-owns it with two other people.

For a while, he was content with flying the Socata to places in Malaysia and Thailand, including Penang, Ipoh, Tioman, Redang, Malacca, Phuket and Krabi.

"But my itchiness extended," he says with a cheeky smile.

So, in 2009, he decided to try to become an Instrument-Rated pilot. If he achieved this, he would be able to fly not only under visual flight rules, but also in instrument meteorological conditions, such as inside clouds.

Getting this rating was tough, however. He flew to Seattle in the US thrice, for about two weeks each time, to complete the various testing segments. During those trips, he would wake up at 4am to study, then go out to fly.

Mr Ang, who remarried in 2009, says his wife would remark: "Isn't this supposed to be a hobby?" His wife is a tutor and he has a 20-year- old son from his first marriage.

He succeeded in getting the rating within a year and bought a second-hand four-seater Columbia 350 while still co-owning the Socata. The Socata is currently in Johor and Mr Ang rents it out.

The Columbia cost him and another shareholder "the price of a luxury car".

Flying the Columbia back to Singapore from London was an adventure, he says. He lists some of the stops and destinations on his week-long journey, which he tackled with a co-pilot in 2011 - Cannes, Malta, Greece, the Red Sea, Dubai, Karachi and Chiang Mai.

He recalls having dinner at sunset on a beautiful Greek island and flying over the Gaza Strip. He says: "When seen from 15,000 feet up in the air, the strip looked very small. I remember wondering to myself, 'People are fighting over this?'"

"It's really exciting. You feel like a young kid seeing the world, because while I'd flown all over on commercial flights, I didn't get to see the sights I see when flying a small aircraft."

Here, he gives credit to Mr Ng Yeow Meng, founder and managing director of WingsOverAsia, a social network for private aviators and enthusiasts in Asia that is based in Singapore.

Mr Ang is a member of this network and says Mr Ng helped to coordinate all the landing permits for the various stops along the London-Singapore flight.

"He gets all the logistics figured out so that people like us can just do what we love - fly," says Mr Ang.

Last year, he went to the US again to upgrade his licence. This time, it was for a multi-engine rating that would enable him to fly aircraft that had more than one engine.

With that in hand, he sold the Columbia and bought his current aircraft, a second-hand Diamond DA-42 Twin Star. He co-owns it with a friend and, again, would divulge only that it cost him "the price of a luxury car".

So how long more will it be before he gets "itchy" again?

He chortles and says: "I dare not. Every time my wife sees me on the Internet, she will ask me, 'Hey, are you surfing plane pornography again?'"