The post, which has been shared more than 20,000 times, has sparked memes and made headlines in Hong Kong and Britain.

But beyond the laughs, the pair's fiasco has brought to light a bigger issue: How couples have to be careful when signing up for packages with bridal studios here because, most of the time, they will not get to pick the photographer. 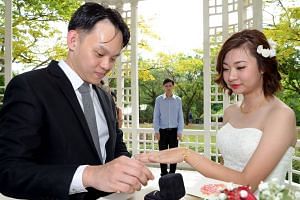 The couple in question signed a $3,000-plus deal that included hair and make-up services, three rented wedding dresses and 10 hours of photography on their wedding day. The couple could not choose the photographer, but were reassured that the quality of the pool of photographers would be "consistent".

When contacted by The Sunday Times, they declined to say anything other than "bridal shops should be more transparent with their clients by showing specific portfolios" of the photographers.

It is a sentiment shared by fellow brides Dawn Chia, 30, and Jacintha Ng, 29 - both of whom had also signed up for all-in-one photo packages at bridal studios that did not allow them to pick their photographers.

Mrs Chia, a teacher who paid close to $3,500 for her package, ended up hiring another freelance photographer for $700 on her big day when the one assigned to her by the bridal studio failed to turn up on time.

Instead of 5.30am, he showed up at 8am and missed the shots of her pre-wedding preparations, when she was having her make-up done.

At the last minute, she hired another photographer. While the first guy did eventually show up, "his pictures turned out to be very ugly anyway", she says.

"Bridal studios don't tell you the qualifications of their photographers - you have little choice but to trust them."

As for Ms Ng, a public relations associate account director who paid $4,000 for her package, she says that her photographer was "amateurish".

Earlier on the telephone, she had briefed him on getting "natural, candid shots" but, on the day itself, he stuck to "stiff, posed photos".

She now advises friends getting married to ask to see samples of photos taken on the wedding day, instead of pre-wedding shots which are usually nicely set up and may not give a good indication of a photographer's skills.

They are not the only brides unhappy with their wedding photos here. From April last year to March this year, the Consumers Association of Singapore (Case) handled 26 complaints against bridal shops, with five over unsatisfactory photo services.

All five complainants declined to be interviewed, but Case shared details of the complaints, which included problems with blurry photos, the last-minute replacement of photographers and a defective camera resulting in no photos taken during the banquet.

One likely reason for such problems is because some bridal studios cut corners and hire amateur photographers to save money.

Given the competitive pricing of the photo packages - the market rate is from $3,000 to $4,500, covering hair, make-up, gown rentals and alterations - the photographer will receive only a fraction of the package money.

For Ms Ying and Mr Tang, their photographer Andy Goh was paid $350 for 10 hours of shooting excluding editing - a sum he shared in a Facebook post where he also apologised for the bad photos. Several bridal studios, who all declined to be named, told The Sunday Times that his fee is below the average of the $600 to $1,000 that photographers typically get.

Mr Goh, 55, whose day job is a supervisor of a printing company, tells The Sunday Times that he took on the job not for the money, but because he enjoys photography. He has been shooting weddings on weekends for the past 20 years on a freelance basis.

It was the first time he has experimented with colour filters, because "I had very good rapport with the couple and wanted to do something extra for them".

He says it is easy for him to remove the filters if they prefer it. "I just hope they will find some of my other photos more acceptable," he says. He had given the couple 900 pictures to choose from.

The bridal studio that hired him, Feline Wedding, says it had hired Mr Goh once "years ago" and there had been no complaints.

Ms Rachel Wang, 50, the gown designer and person-in-charge at the studio, says in Mandarin that his rate of $350 is "not that low".

She adds that some studios pay polytechnic students only $100 or $200 for the same number of hours. Some students even do the job for free for experience.

"For example, it can rain during outdoor shoots. Ideally, couples should meet beforehand to discuss the flow of the wedding and what types of pictures they want, so photographers can plan the shots."

He adds that it is crucial to choose experienced photographers.

But with top-rated photographers costing thousands of dollars for a day here, that option may be out for some couples.

Ms Ng says: "I know what I'm paying for, so I'm not asking for amazing pictures - I just hoped to have some decent candid shots.

"Hopefully, bridal studios can give couples the chance to meet photographers beforehand and let them see the photographers' portfolios so that expectations can be better met."