Illusion make-up, or using the body as a canvas to paint optical illusions, is getting popular in Singapore

If you do not have an outfit ready for Halloween, do not fear.

It is not too late to turn your body into a costume and morph into the character of your wildest dreams, say local make-up artists skilled in the art of illusion make-up.

This style – where one’s body is used as a canvas for the painting of optical illusions – has been around for years, but local make-up artists say it has been gaining popularity here recently.

The growing interest is, in part, thanks to well-known Instagrammers such as Vancouver-based artist Mimi Choi, South Korean artist Dain Yoon and American artist Jody Steel.

They each have hundreds of thousands of followers on social media and have popularised the style with jaw-dropping videos and photos of their work, which showcases illusions of faces sliced apart, bleeding bodies, limbs pierced with objects and camouflage, where the subject blends into a chosen background.

In Singapore, there are a handful of make-up artists skilled in the art of illusion make-up.

A full look usually takes at least three hours to complete and can cost between $150 and $250 an hour.

One full-time make-up artist here is Casanndra Han, 34, who is known in the industry as Zennie Casann.

She has been in the trade for 16 years and says “trick-eye make-up” – as she terms the style – has become a fashion statement of sorts in recent years, especially during Halloween.

While many of her customers ask for their faces to be transformed into human skulls, which can fall under the category of illusion make-up, Ms Han adds that there are those game to try something more adventurous.

Clients, she says, are increasingly familiar with the works of Choi, Yoon and Steel and there have been requests to re-create their looks.
“People are more daring now and are more keen to try looks that will really transform their physical appearance,” she says, adding that she has turned subjects into walking oil paintings.

Gone are the days where clients tell her to “tone down” a particular look, she says. “These days, they tell me: Bring it on. Do anything you want.”

Demand is so high that she is close to fully booked on the weekends leading up to Halloween this year, with bookings from individuals, private groups, pubs and clubs and community centres.

This demand is a three-fold increase compared to five or six years ago, she says.

Apart from Halloween, some customers also paint on illusion make-up for their companies’ dinner and dances or for themed parties at bars and clubs.

“People have easy access to artists’ photos and make-up video tutorials online and draw their inspiration from there,” she says.

A good illusion artist, says the 41-year-old, needs to excel at drawing and have a keen eye for detail.

“The artist’s drawing foundation and technical skills need to be solid, because illusion make-up is all about making things look real,” says the artist and hairstylist who does creative make-up, special effects and face and body painting.

She usually requests her clients set aside at least six hours for her to complete a full illusion make-up look.

Ms Han agrees that a common misconception that people have of illusion make-up is that it can be done quickly when, in fact, she can spend up to two hours just painting a single, life-sized eye.

To pull off an effective illusion, she says, it is important to be familiar with the human anatomy, especially the placement of the cheekbones, muscles and jawline.

An artist must also know where the light hits the subject, as this can make or break an optical illusion.
It also takes some skill to transform the painting on the subject’s face and body from a two-dimensional to three-dimensional perspective, she says.

Ms Ong says she is pleased when she sees the delight in the eyes of those whom she paints.

“That’s when I feel like a fairy godmother of sorts, transforming them into characters that give them the confidence to live out their fantasies and party the night away,” she says. 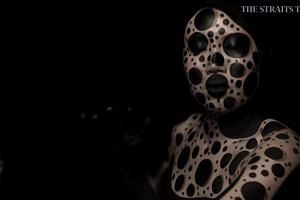 Last year, Ms Sharon Zhuo, 32, paid several hundred dollars to engage Ms Han, who spent about three hours transforming her into a mermaid for her company’s dinner and dance.

She had found Ms Han after an online search for make-up artists.

The bespectacled woman put aside her glasses for coloured contact lenses that evening and, using only make-up, Ms Han worked to enlarge her eyes, sharpen her nose, thin her lips and re-contour her face to make it look V-shaped.

To complete the look, Ms Han also created the illusion of scales around her chin area.

Ms Zhuo, who works as a product development and innovation manager in the food industry, says: “My colleagues could not believe it was me. The transformation was dramatic.”

Ms Ruth adds that illusion make-up is fun to do and has low barriers to entry because one can simply begin by experimenting on oneself.

“You don’t have to be a professional artist to turn yourself into an art piece. Your body can be your own canvas,” she says.

A version of this article appeared in the print edition of The Sunday Times on October 29, 2017, with the headline 'Body of work'. Subscribe
Topics:
More
Whatsapp Linkedin FB Messenger Telegram Reddit WeChat Pinterest Print Copy permalink