With parents more willing to spend on trendy clothes for their children, stores are expanding their range in this retail segment

The 37-year-old, a regional director of sales, shops for them during lunch time or after work.

While Mark, six, Lauren, four, and Jude, one, are at a stage of their lives where they outgrow their clothes quickly, Mrs Wong admits that she also buys them new clothes because she feels guilty about not spending enough time with them. She thinks that shopping for them is a way for her to show affection. 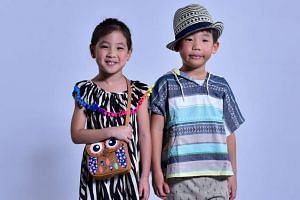 She spends about $100 on each shopping trip and is a regular customer at mass market-label stores such as Cotton On and H&M.

"I get suckered into shopping at Cotton On's online store when the brand is having a 20 per cent discount storewide. I go online and think to myself, 'Okay, I think they need some more pyjamas', or I will see a pretty dress and add it to the shopping cart."

While parents and grandparents may have grown up with a culture of saving as much as possible... they may now feel that they could be a bit freer spending on their children and grandchildren.

Thanks to indulgent parents like her, the children's clothing market has become the one bright spot in the weak retail sector.

The range of children's clothes has expanded in recent years, with the arrival of new brands and the expansion of existing ones.

Australian label Seed Heritage, which carries clothes for women and children (from babies to teenagers), debuted with a splash in Singapore last year by opening three stores in Parkway Parade, VivoCity and Wisma Atria.

The label's general manager, Ms Denise Haughey, says that the 16-year-old brand had received regular inquiries from mothers living here before it opened in Singapore. She declines to give sales figures, but says: "Singaporean parents really enjoy dressing up their little ones."

Seed Heritage clothes feature plenty of whimsical prints and stylish pastel colours and are priced between $7.95 for three pairs of boy socks and $59.95 for a girl's embroidered dress.

Israeli high-street label Fox, which carries clothing for women, men and children, has enjoyed an "overwhelming" response to its children's and baby collection.

A spokesman for Wing Tai, which distributes the brand here, says the good response can be seen from the large number of members who sign up to collect points for discounts. The brand has accumulated 120,000 members since opening here in 2004.

The spokesman adds: "We've noticed parents are becoming more trend-conscious when it comes to dressing up their children and this has helped spur the childrenswear industry."

The department previously shared space with its men's fashion.

H&M's clothes for children, aged from newborn to 14, include T-shirts, jeans and cotton dresses.

Like in the adult range, the children's clothes are priced competitively, ranging from $19.90 for a white lace top for girls to $59.90 for a cotton blazer for boys.

Ms Abby Wee, public relations manager for H&M Singapore, says the brand has also expanded its childrenswear range to include sportswear, swimwear and dancewear because of strong sales in childrenswear.

Another popular Japanese label, Muji, sells its children's collection at three of its nine stores here.

Ms Jasmine Sng, general manager for Muji (Singapore), says the label had received many requests to bring in childrenswear. Muji shirts and dresses for children range from $12.90 to $59.

Ms Sng says the sales of children's and babies' clothes have grown from 7 per cent of total garment sales in 2014 to about 10 per cent.

The expansion in children's labels is also mirrored in the luxury end of the market.

Italian label Dolce & Gabbana Junior opened a 1,400 sq ft space in October. The outlet is the brand's first junior store in the region and its collection carries clothes for children aged newborn to eight years old.

Other children's labels at The Shoppes include Baby Dior, which opened a 900 sq ft store in 2014 and Ralph Lauren Children, which opened its largest standalone store for childrenswear in South-east Asia in the same year. The flagship store for the American label spans 1,985 sq ft.

The designer label clothes for children can cost $550 for a boy's shirt and a couple of thousands of dollars for a party dress.

Retail experts interviewed say growing affluence and smaller families have led to the strong growth in the childrenswear market.

Mr Samuel Tan, course manager (diploma in retail management) at Temasek Polytechnic School of Business, says: "With fewer children a household, parents or even relatives are willing to spend more on the kids.

"With generally higher disposable incomes and more affluent dual-income families, design, look and quality of clothes are prioritised over price."

He adds that parents who are loyal customers of a brand are also more likely to shop for their children at the same store.

"With the growing popularity of brands such as H&M, Uniqlo and Cotton On, the line extension is a logical move."

He adds that today's parents have higher incomes compared with those of previous generations and are more willing to spend on their children.

"While parents and grandparents may have grown up with a culture of saving as much as possible and have grown used to spending less on themselves, they may now feel that they could be a bit freer spending on their children and grandchildren," he says.

Manager Jonathan Heng, 38, admits that he shops more for his two sons than for himself.

"It is more because of necessity. They grow so fast and outgrow their clothes and shoes quickly," says Mr Heng of Caleb, four, and Zachary, three months old.

"My wife and I probably shop for them every other month. As parents, our lives are about our kids now anyway," he adds.

Ms Sharon Yeoh, a senior consultant at the Civil Service College's Institute of Leadership and Organisation Development who has two daughters aged six and three, says she also shops more for her children than for herself. "It is more fun shopping for them. The clothes are so cute and pretty."