The error on this $50 banknote could have been a result of a few pieces of paper overlapping during the printing process, says Mr Leon Lee, 53, manager of coin-andbanknote dealership Monetarium Singapore

This note will be up for auction in October. Because the error is highly unusual, its minimum bid price is $3,200. In 1992, many people tried to get their hands on a special issue of $2 notes after they were found to contain a spelling mistake that had occurred during the printing process.

These notes had been included in a book, Prudence At The Helm, which was printed to commemorate the 25th anniversary of what was then known as the Board of Commissioners of Currency, Singapore. 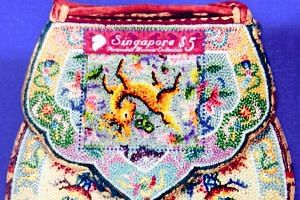 The stamp on the front of the notes was spelt "Board of Commissoners of Currency", with a missing "i". This error made the notes a collector's item because there are only 5,000 copies of the book with one commemorative $2 note in each. This 20-cent coin from 1981 is thicker than usual and misaligned because a metal of the wrong thickness was used during the minting process, says Mr Laurence Lau, 59, owner of coin-and-banknote dealership Coins & Coins.

He purchased this coin in recent years and says he has never come across an error like this in the 25 years that he has been in this business.

He cannot estimate how valuable it is, however. "Because it is so unique, I keep this as a souvenir. It is part of my personal collection," he says. Seeing double? There should have been only one female figure (left) on this stamp from the 1968 Masks And Dances Definitives collection. But a misalignment during the printing process caused two to appear.

The fish featured on this stamp, which is from the 1962-1966 Fishes, Orchids And Birds Definitives collection, is missing its stripes and colour.