SINGAPORE - Japanese avant-garde artist Yayoi Kusama's blockbuster exhibition at the National Gallery Singapore has set a new record for visitorship at the museum, drawing more than 235,000 people over its three-month run.

Yayoi Kusama: Life Is The Heart Of A Rainbow closed on Sunday (Sept 3) after a successful run, where Singaporeans and foreigners alike formed long queues to view the 88-year-old artist's works and posted furiously about them on social media.

It outpaced notable local art exhibitions such as Chinese master Wu Guanzhong's Donation Collection, which drew close to 220,000 visitors to the Singapore Art Museum in 2009.

Other exhibitions that proved crowd magnets include the ArtScience Museum's Titanic: The Artifact Exhibition, which had more than 286,000 visitors in 2012.

Due to the overwhelming response, the Gallery, which opened in 2015, extended its operating hours till midnight for the exhibition in the final three days of its run.

Open since June 9, the exhibition was Kusama's first major museum showing in South-east Asia, showcasing more than 120 artworks from the 1950s till the present in 2,000 sq m of gallery space. 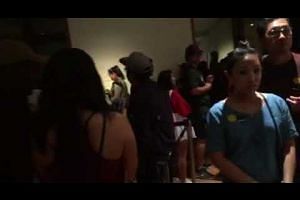 It featured some of Kusama's signature works, including her dotted pumpkins, infinity nets and mirrored rooms, and was also the first exhibition in the world to display some of her new soft sculptures and paintings from her My Eternal Soul Series

out of her studio in Tokyo, including the painting that the exhibition was named after.

Entry to the exhibition cost $15 for Singaporeans and

permanent residents, and $25 for non-Singaporeans.

The adult ticket price for the Titanic exhibition was $21, while that for Wu's Donation Collection was $8.

The exhibition, which is a collaboration between National Gallery Singapore and Queensland Art Gallery and Gallery of Modern Art (Qagoma), will next travel to Qagoma's museum in Brisbane in November.

Kusama is considered one of the biggest and most influential artists today. Her signature use of dots stems from the chronic hallucinations she experiences due to her mental illness.