LOS ANGELES (AP) - Scandinavian writer Ari Behn - the ex-husband of Norwegian Princess Martha Louise and among the people who had accused actor Kevin Spacey of sexual misconduct - died this week, his manager said. He was 47.

Authorities said he was found at his home in Norway.

The Norwegian royal family said in a written statement that Behn was "an important part of our family for many years and we carry warm and good memories of him with us."

Behn, who was Danish-born, and Martha Louise, the oldest daughter of Norway's King Harald and Queen Sonja, were married for 14 years. The couple divorced in 2017 and have three children.

The match had critics before it even became official. Negative coverage dogged Behn after a Las Vegas travelogue he hosted on Norwegian TV in the early 2000s briefly showed him around prostitutes, some of them using cocaine.

Behn said at the time that it was mere reporting, not endorsement, and Martha Louise defended him.

Behn also wrote books and plays, including 1999's "Trist som faen," or Sad As Hell, a short story collection that was translated into several languages.

In 2017, Behn accused Spacey of groping him under the table at a Nobel Peace Prize concert in Oslo a decade earlier. It didn't appear that Behn ever pursued criminal charges or a lawsuit against Spacey.

Behn's death came a day after Spacey, 60, released a YouTube video in which he pretends to be Frank Underwood, the scheming politician he played in the Netflix series House Of Cards. He did not address the cascade of allegations against him.

Spacey was dropped from House Of Cards after several people stepped forward with allegations of sexual misconduct. The final season aired last year.

Massachusetts prosecutors this year dropped a criminal case alleging the Oscar winner groped an 18-year-old man at a bar on the resort island of Nantucket in 2016. The unnamed accuser in that case invoked his Fifth Amendment right not to testify about text messages from the night of the alleged encounter. 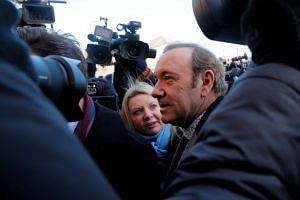 Police in London have also said they are investigating allegations of sexual misconduct by Spacey, but there has been no public update on that inquiry for months.

Los Angeles prosecutors this year tossed a sexual battery charge against Spacey after the unnamed accuser in that case died.

Another player in the Spacey saga, Linda Culkin, was fatally struck crossing the street in Quincy, Massachusetts, in May.

The former nursing assistant had pleaded guilty to sending death threats and bomb threats to Spacey and his associates. She was sentenced to over four years in federal prison in 2014.

Prosecutors said at the time that Culkin became obsessed with Spacey after a patient told her of being attacked by him.