Kalaa Utsavam highlights powerful females and works helmed by women, but this was not a conscious decision, says the festival's producer

A number of productions in the 15th edition of the festival are inspired by powerful female heroines or helmed by women.

Bharathaa Arts is run by Suganthi Kumaraguru and Jeyanthi Balasubramaniam, who are better known as the Kesavan sisters.

Singapore artist Pooja Nansi presents a refreshed and expanded version of her one-woman show, You Are Here, with poetry and stories that explore her family history and experiences growing up in Singapore. 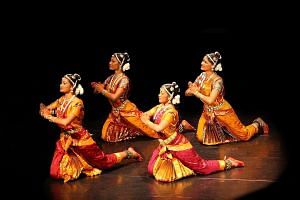 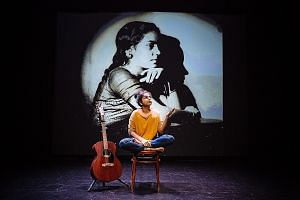 Stories about growing up Indian

Veteran Indian actress Arundhati Nag takes the stage for the play Bikhre Bimb - Broken Images. She plays a novelist who questions her identity and rootedness to language after a novel she writes in English gains her fame.

And two men, author Devdutt Pattanaik and pianist Anil Srinivasan, will bring out the nuances of how the goddesses in Indian mythology wield influence - in power and strength and in more subtle ways.

The festival runs from Friday to Nov 27 and is sponsored by the SPH Gift of Music. It presents different forms of Indian arts, both traditional and contemporary.

The festival's producer, Ms Rajeswari Ramachandran from the Esplanade, says it was not a conscious decision to programme such strongly female-centric productions, "but more a thread that emerged after we had put the festival's line-up together".

"However, the female entity has always had a prominent presence in Indian arts, culture, mythology and its stories," she says, giving the example of Sita, the heroine in the Indian epic poem, the Ramayana.

"So, it is not a coincidence that strong female characters have emerged as a thread in this year's Kalaa Utsavam, but more a reflection of the prominence the female entity has always had in Indian arts and culture."

The festival also includes a range of diverse programmes, including a concert by popular Pakistani band Strings on Nov 26 and Utterly, Butter-ly Stories Of Krishna, a home-grown play for children about the Hindu god on Nov 27.

There will be a number of free programmes throughout the festival period as well.

Local artists will present music performances every evening at the Esplanade Concourse - from music featuring traditional instruments such as the sitar and the Indian drum, mridangam, to fusion performances involving instruments from other cultures and Bollywood music.

Also look out for an exhibition detailing the history of Indian performing arts in Singapore at the Esplanade Festival Corner. It runs till Nov 27.

•Go to www.esplanade.com/kalaautsavam for more information

A version of this article appeared in the print edition of The Straits Times on November 15, 2016, with the headline 'Of heroines and goddesses'. Subscribe
Topics:
More
Whatsapp Linkedin FB Messenger Telegram Reddit WeChat Pinterest Print Purchase Article Copy permalink