SINGAPORE - Singaporean writers Sonny Liew and Jeremy Tiang both wrote books that challenge the established narrative of Singapore history. Now, coincidentally, both have won the prestigious Singapore Literature Prize (SLP) for English fiction, despite having had state funding withdrawn or partially revoked earlier.

New York-based author and translator Tiang, 41, won the prize on Monday (Aug 6) for his novel State Of Emergency, which traces leftist movements throughout Singapore's history.

He follows cartoonist Liew, 43, who won in 2016 for his bestselling graphic novel The Art Of Charlie Chan Hock Chye, a retelling of Singapore's political history through the eyes of a fictional artist, from which the National Arts Council (NAC) had withdrawn an $8,000 grant citing "sensitive content".

Tiang had been awarded an NAC Creation grant of $12,000 for his novel, of which he had already received $8,600. But after he sent the council the first draft, the remaining funding was withdrawn. He was not made to return the amount already disbursed to him.

Asked about Tiang's win, Ms May Tan, NAC director of sector development (literary arts), said: "NAC has supported Jeremy Tiang in various projects and will consider doing so for his future works that are in line with our funding criteria and our strategic priority of taking Singapore literature to greater heights."

She added: "The Singapore Book Council established and has been managing the Singapore Literature Prize independently since 1991. The Book Council is supported by NAC under the Major Company scheme from Apr 1, 2016, to March 31, 2019."

The judges for the prize's English fiction category - Books Kinokuniya (Pacific Asia Region) senior store and merchandising director Kenny Chan, Singapore-based author Shamini Flint and Ms Kate Griffin, associate programme director of the National Centre for Writing in Norwich, Britain - said their decision to award it to Tiang was unanimous, and stressed it had nothing to do with the controversy.

"The grant withdrawal was never in consideration," said Mr Chan. "We have 30 books to plough through in two months. There was no time to think of anything save the book's literary merits, accessibility and contribution to the tapestry of what makes Singapore what it is to Singaporeans."

Ms Griffin said she had not been following the funding controversy. "State Of Emergency is an outstanding novel. It's... an important book that will appeal to readers internationally as well as in Singapore." 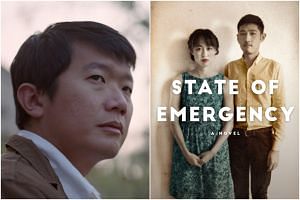 Similarly, Ms Flint said: "Speaking for myself, I judged the work purely on its literary, historic merit and artistic merit, which the book has in spades. I wasn't aware that the NAC has withdrawn some funding and I don't really see what that has to do with anything, as far as judging books on literary merit goes... Even if I had known, it wouldn't have affected my thought process or choice, so there was no effort to either pick a controversial book or avoid one - just the best one of a good bunch."

Other local writers said the wins demonstrated the independence of the prize.

Writer Judith Huang, who like Tiang was previously shortlisted for the Epigram Books Fiction Prize, said: "I do not think the grants were withdrawn because of a lack of literary merit. The NAC could be more transparent on the criteria for withdrawing funding. Without this, it is hard to say."

Political themes will always be a concern for any governmental body in Singapore, said writer Cyril Wong, a two-time SLP winner for English poetry. "Unless the larger society changes, fears of dealing with certain themes that might 'upset' the status quo will always be the norm."

"One must take into consideration that supporting the arts must include the arts that challenge norms and discuss a whole range of matters, from the existential to the political, in an open-hearted and productive way - or else the arts will never grow or serve as a rewarding mirror to society."