SINGAPORE - Two Singaporeans have been shortlisted for the Hugo Awards, one of the highest honours in science fiction and fantasy writing.

J.Y. Yang and Vina Jie-Min Prasad are finalists in the annual awards by the World Science Fiction Society.

Yang's The Black Tides Of Heaven (2017) is in the running for Best Novella, while Prasad's A Series Of Steaks (2017) and Fandom For Robots (2017) have been shortlisted for Best Novelette and Best Short Story respectively.

Prasad has also been nominated for the John W. Campbell Award for Best New Writer.

The three works have also been shortlisted for the prestigious Nebula awards, which are voted on by members of the Science Fiction and Fantasy Writers of America. The winners will be announced on May 19.

The Black Tides Of Heaven, a "silkpunk" fantasy novella, is the story of twins Mokoya and Akeha who are given to a monastery. Mokoya has the gift of foresight, while Akeha can manipulate elements in the natural world. It was published last year by sci-fi and fantasy site Tor.com as part of her Tensorate series alongside The Red Threads Of Fortune. The Descent Of Monsters, the third novella in the series, will be out in July.

Yang, a science communications officer, describes the news as "surreal".

"When I was a kid, my friend and I used to download the entire list of novels nominated for the Hugo Awards and try to get through them... (Being a Hugo finalist) is not something I thought I would ever be." 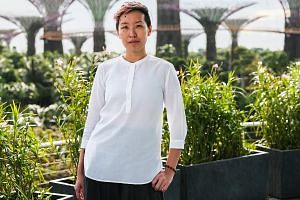 The 35-year-old, who is up against authors such as Nigerian-American writer Nnedi Okorafor, who won the Hugo award for best novella in 2016, says of the shortlist: "It's amazing for diversity, in terms of gender, ethnicity, sexual orientation. There are a lot of queer people, women, people of colour."

The Hugo Awards, which were first given out in 1953, are named after Hugo Gernsback, who founded Amazing Stories - the first major American science fiction magazine - in 1926. Previous winners include China Mieville, Neil Gaiman, Ursula K. Le Guin, Arthur C. Clarke and Ted Chiang.

Starting this month (April), members of the World Science Fiction Convention (Worldcon) will vote for the winners, who will be announced on Aug 18 at a ceremony at Worldcon 76 in San Jose, California.

A Series Of Steaks is about a two women in Nanjing who counterfeit quality beef, while Fandom For Robots is about a sentient robot who discovers anime and online fandom.

Prasad, 28, a freelance researcher who started submitting to science-fiction magazines only last year, says: "I'm kind of excited and also quite nervous about this. I will be attending Worldcon - it will be my first American convention."

With a nod to fellow nominees such as American short story writer Fran Wilde, whose work she admires, Prasad adds: "I am really thrilled to be among such authors."