The challenge was how to tell the Singapore story in the form of an exhibition without drowning viewers in information overload.

Five months of extensive archival research later, Singapore STories: Then, Now, Tomorrow, co-curated by the ArtScience Museum and a team from The Straits Times, opens on Friday. It charts Singapore's struggles and triumphs through stories documented in the newspaper and is the first exhibition at the museum that is not ticketed and free to the public. 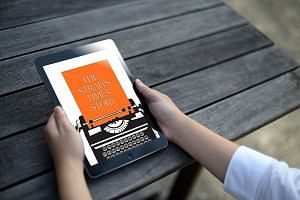 CapitaLand is the exhibition's presenting sponsor, with Standard Chartered Bank coming in as a second sponsor.

The exhibition unfolds across six galleries. Instead of following a chronological order, the themes mirror the different sections of the newspaper: Business, World, Home, Sport, Life and Forum.

The museum had proposed using sections of the newspaper as a device for curating the content, which allowed the team to move away from a conventional linear chronology.

Co-curator Ms Huang says: "This freed us from the impossible burden of re-telling every significant story in Singapore. Instead, we were able to focus on drawing connections between Singapore's past, present and future.

"In doing so, the exhibition mirrors the strength of a newspaper, which is to offer the public insight into and understanding of events unfolding around them."

It comes as the newspaper celebrates its 170th anniversary and Singapore marks 50 years as a nation.

Lead curator Ms Long tells Life this collaboration and extensive research was needed to tell the history of Singapore as depicted through "the ST lens as authentically as possible", while Ms Harger calls this "a compelling exhibition that is accessible in reach and fresh in its outlook".

Among the key challenges faced by the team was deciding which key events in the last 170 years could tell the Singapore story best. Ms Vasko stressed the need to go deep into the newspaper's vast archives and come up with a storyline that was "fresh".

Hence the approach of structuring material around the different sections of the newspaper, together with hands-on interactive displays.

For example, within the Business gallery, there is an interactive timeline which showcases the goods that have been traded in Singapore in the past 170 years. In the Home gallery, viewers can test their knowledge of acronyms commonly used in Singapore.

A World cover page in the World gallery invites visitors to consider which area Singapore will come out tops and make international headlines in 50 years' time. Within the Sport gallery, they can build their own future sporting centres and, in the Life gallery, explore traditional costumes that have been mainstays of how people here dress.

The end result, says Ms Vasko, is "a very different way of telling the story of the nation, while looking at its past and present and how these will shape the future". 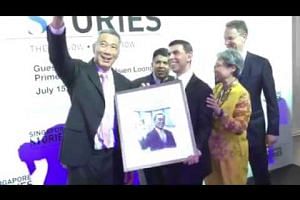 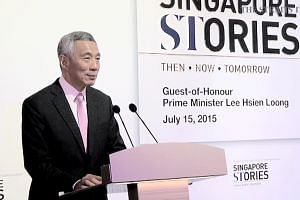 For the journalists who were part of the team, the main challenge was learning ways of telling the story on a new platform - in this case, the exhibition experience.

They needed to look beyond just text and pictures, as they are trained to do, and also look at using walls, spaces and structures while integrating sound as well as activities for the public.

Reflecting on this, Ms Long, an award-winning feature writer, says: "My conclusion is that journalists are habitual over- providers and over-researchers. We want to give so much, perhaps too much. But the exhibition medium is spartan, especially where text is concerned.

"So that was our challenge. Obviously, everything had to be edited down and streamlined significantly - and painfully. We had to think as hard about what to put in as what we would have to leave out."

The exhibition also juxtaposes big and small events to provide a multi-faceted jaunt through history.

Aside from historic front-page reports and photographs such as the front page of the paper on Aug 10, 1965, with the stark headline "Singapore is out" - capturing all the drama of the separation from Malaysia - the exhibition also trains the spotlight on lesser-known but captivating stories, such as the flood on Cecil Street in 1948 or the everyday tendency to "chope" or reserve seats or places in a queue, which plays on the Singaporean fear of losing out to the competition.

In sum, the stories take viewers from the time of Singapore's robust entrepot trade in the mid-1800s to independence in 1965 and the push towards a sustainable future in the new millennium.

As Ms Vasko puts it: "We come to know a people through their stories. We see stories of origin, adversity, failure and triumph."

Looking ahead to the future, the Forum gallery will highlight 50 ideas from the public on Singapore's future buildings, homes and green spaces.

The ideas will be selected from submissions to the #BuildSG2065 contest held by The Straits Times and CapitaLand, one of Asia's largest real estate companies.

Mr Warren Fernandez, editor of The Straits Times, says the exhibition reflects how the newspaper has had a front-row seat to the nation's history. "From its early colonial years, through several wars, change of regime and national allegiance, The Straits Times has seen it all. It has chronicled these highs and lows in Singapore's history through the decades."

The show hopes to "bring that history alive for today's Singaporeans to help us remember where we have been, how we got here and where we might be heading".

Mr Lim Ming Yan, president and group CEO of presenting sponsor CapitaLand, calls this "a meaningful exhibition that depicts not just milestones in Singapore's history, but also how lives have changed against the backdrop of our evolving skyline and cityscape".

About 200 images in the exhibition are being published as a book titled Front Page: STories Of Singapore Since 1845. This will be sold at $25 (without GST) at the museum and at bookstores islandwide.

Veteran news hands such as Ms Yeow, Ms Fang - who did most of the picture editing for the exhibition - and Ms Long are confident many of these will resonate with visitors.

Says Ms Long: "We have so many favourite pictures, of a more rustic time, of five-foot-ways, firecrackers and floods. We took some of them and created sepia-toned collectors' edition notebooks. As newsroom veterans, we found it thrilling to uncover for the first time shots and slices of life of Singapore in the 1950s we had never seen before."

As is to be expected from an exhibition of this scale, the images and words will mean different things to different people.

When asked what she hopes visitors will remember from Singapore STories, Ms Long says: "I hope people will take away literally how storied The Straits Times is."

"This delightful picture is one of our favourites. A boy stands on the historic Elgin bridge with a girl in her short dress. They peer at the contingent of British soldiers marching during the Queen's birthday parade in 1952, both illuminated by rim light from the sun.

"There is a large billboard advertising what looks like a Chinese product of that era and, in the distance, the magnificent dome of the Supreme Court stands tall. The multi-layered elements come together in this perfectly composed and interesting image."

"This photograph shows 'chope-ing' (reserving a place, in this case, in a queue using tissue packets and other proxies) was already a way of life, 40 years ago. The aspiration to enrol a child

into a good school is not just a modern-day obsession. Back in 1970, it was the same situation when 'chope-ing' was a way to get a child into a school of choice.

"However, it was on a first-come, first-served basis then, unlike the complicated process it is today. This photo provides a sense of familiarity and comfort in depicting certain practices that do not change over time."

"This is a never-before-published photograph of the biggest and grandest tomb at Bukit Brown Cemetery belonging to Ong Sam Leong, a prominent and successful businessman.

"The grave is dwarfed amid the thick greenery, but it is actually about 600 sq m, the size of six four-room HDB flats. This is a view of Bukit Brown that few have seen."

"This photograph looks like a scene out of a movie set. It presents a slice of Singapore life which we are not accustomed to seeing, with men pushing their carts and trishaws through the flood, people wading through shin-high waters and cyclists steering through Cecil Street in 1948."

"The photo of two boys kicking a football at the void deck of an HDB block will resonate with most Singaporeans.

"The void deck is a common space that the majority of Singaporeans who live in public housing are familiar with and the photographer has captured a fun and carefree moment between two friends, in a well composed image bathed in beautiful light and shadows."

"The first page oneis something that we are proud to be associated with, by virtue of the fact that we are part of the newspaper, 170 years later. It reminds us of our beginnings and how far we have come. You can see and read up close what went into our very first issue."

Get behind-the-scenes insights into the making of the exhibition. Learn about front-page stories, headlines, photographs and their significance in shaping the Singapore STories. Tours are led by The Straits Times arts correspondent Huang Lijie and ArtScience Museum project manager and curator Julia Vasko.

Where: Meet at Level 3, entrance of the exhibition at ArtScience Museum, Marina Bay Sands

Hear the stories behind some of the defining headlines over 170 years of The Straits Times.

Where: Meet at Level 3, ArtScience Museum, entrance of exhibition

When: Every Saturday and Sunday till the end of the exhibition. Tours start from July 25 at 2pm.

Where: Meet at Level 3, ArtScience Museum, entrance of exhibition

Printing From The Past: Letterpress And Typesetting

Typesettingsg provides an introduction to letterpress printing and typesetting. Learn the stages, including layout, lockup, ink and colour and packing. Participants get to operate a typesetting machine.

Admission: $15 a person. Tickets from entertainment.marinabaysands.com/events/printing2015 or from the museum box office. Limited to 12 persons a session