A ghostly, shimmering 19th-century boat docked in Marina Bay will greet passers-by from next week.

This holographic art installation, part of the upcoming i Light Singapore - Bicentennial Edition festival, was inspired by the sampan panjang (long dwelling boat) used by the orang laut sea nomads, and its racing boat variations.

The public will be able to see Sails Aloft from The Promontory and Mist Walk near the Marina Bay waterfront.

Depending on the wind and the angle from which it is viewed, there might be one, two, four or even six boats neckand neck.

"The artwork itself isn't tangible, yet it does work as a sculpture," said Mr Mihai Baba, one of two artists from Estonia-based Biangle Studio who created the installation.

It is one of 33 artworks that will go on display next week as part of the annual i Light festival, which runs from next Monday to Feb 24.

The sustainable light art festival, previously known as i Light Marina Bay, has been organised by the Urban Redevelopment Authority (URA) since 2010 to add vibrancy to the Marina Bay precinct and encourage sustainable lifestyles. 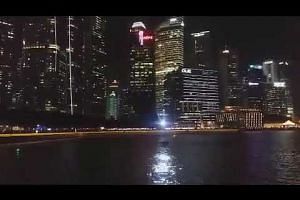 This year, on display are sustainable light art installations and a multimedia show, created by artists from 15 countries, including Singapore.

The festival, which kicks off islandwide bicentennial activities to commemorate the 200th anniversary of the arrival of Sir Stamford Raffles, will expand beyond the usual Marina Bay area to include the Civic District, Singapore River and Raffles Terrace at Fort Canning Park.

In keeping with this year's festival theme, Bridges Of Time, artworks will be installed on six bridges at the Singapore River and Marina Bay area - Elgin Bridge, Cavenagh Bridge, Anderson Bridge, Esplanade Bridge, Jubilee Bridge and The Helix bridge.

Aside from the artworks, there will be more than 20 programmes for the public, such as music performances, upcycling workshops and the Prudential Marina Bay Carnival.

Festival director Jason Chen, who is also URA's director for place management, said: "This special edition is especially meaningful as it forms part of the Singapore Bicentennial commemoration. The artwork line-up collectively reflects the festival's desire to bridge people, cultures and ideas through art and sustainability.

"The light art installations will be strategically placed along the festival route to (take) everyone on the development journey of Singapore since the arrival of its earliest communities at the Singapore River."

WHAT: This installation was created by Singapore industrial designer Lee Yun Qin in collaboration with members of the community. It features solar light modules - upcycled cookie containers combined with solar lights - which sway in the wind to form a shifting prismatic projection on the ground.

WHAT: Walk in front of a large screen stretched along Mist Walk, and your shadow will reveal images from Singapore through the ages, in this installation by Korean-American artist and film-maker Judy K. Suh and Chicago-based arts technology company Visual Feeder.

WHERE: Mist Walk (next to Red Dot Design Museum)

Cenotaph For A Stone

WHAT: This reinterpretation of the Singapore Stone - a slab of sandstone from a boulder that was blown up in 1843 to widen the mouth of the Singapore River - consists of 51 "rock fragments" on steel pedestals. The 52nd pedestal has been left empty, hinting at the piece that now resides in the National Museum of Singapore. Cenotaph For A Stone, which won the inaugural i Light Student Award, was created by National University of Singapore students Bryan Joseph Cadag, Loo Quan Le and Zulkarnain Mohd Zin.

WHAT: As passers-by get in range of the camera, facial tracking will identify their faces and blow them up on the screen. As they move closer to the screen, they can "paint" their faces virtually. This interactive artwork was designed by New Zealand-based Uji Studios.

WHAT: Parallel mirrors in the shape of shophouse windows are part of this installation by Singapore creative design agency Superiore Design Associates. This creates a series of smaller and smaller reflections that seem to recede infinitely into the distance.

WHERE: River Promenade alongside Parliament House

A version of this article appeared in the print edition of The Straits Times on January 25, 2019, with the headline 'Take journey of light across Bridges Of Time'. Subscribe
Topics:
More
Whatsapp Linkedin FB Messenger Telegram Reddit WeChat Pinterest Print Purchase Article Copy permalink