NEW YORK (NYTIMES) – A shiny stainless steel sculpture created by Jeff Koons in 1986, inspired by a child’s inflatable toy, sold at Christie’s on Wednesday (May 15) for US$91.1 million (S$125 million) with fees.

It beat the record at auction for a work by a living artist, set just last November by David Hockney.

He was seated near Mr Peter Brant, the collector and private museum-owner.

It was the ultimate prize among six works offered from the collection of magazine publisher S.I. Newhouse Jr, who died in 2017.

The price – surpassing the US$90.2 million with fees achieved last November, for Hockney’s 1972 painting Portrait Of An Artist (Pool With Two Figures) – confirmed how Koons’ metal sculptures have become the ultimate billionaire trophies.

In November 2013, the artist’s reflective Balloon Dog (Orange) sold at auction for US$58.4 million. 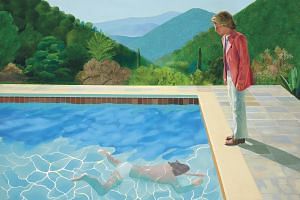 This validation is all the sweeter for Koons, whose career trajectory has been contradictory, controversial and uneven. In 2017, slowing demand for some of his more recent works necessitated a major downsizing of his studio.

Auction prices for his most valuable sculptures have also slumped.

In the past five years, the highest price paid for a Koons sculpture at auction was US$22.8 million, for the coloured aluminium sculpture Play Doh, according to the Artnet database of salesroom prices.