SINGAPORE - The Singapore Writers Festival (SWF) will mark its 20th anniversary this year from Nov 3 to 12 with the theme of "Aram", a Tamil word meaning "goodness" or "doing good".

The word makes a notable appearance in the Thirukkural, an ancient text about ethics and everyday virtue that is widely revered as the most influential literary work in the language.

The festival's country of focus this year will be Ireland, whose population size of 5 million is comparable to Singapore's.

In a statement, the festival organisers noted that Ireland has produced "some of the world's greatest craftsmen in literature", such as James Joyce, Seamus Heaney and Oscar Wilde, as well as numerous Nobel, Pulitzer and Booker prize-winners.

This year, the festival will be inviting eight Irish writers, including poet and editor Gerald Dawe; novelist Rob Doyle, whose metafictional debut Here Are the Young Men, was chosen as one of Hot Press magazine's "20 Greatest Irish Novels from 1916-2016"; and a number of award-winning short story writers such as Colin Barrett, Claire Keegan, Éilís Ní Dhuibhne and Paul McVeigh. 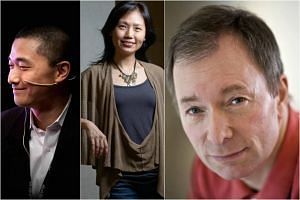 Irish Ambassador to Singapore Geoffrey Keating said of the collaboration: "This is an excellent platform for our writers to hear, and learn from, each other, and at the same time, share their work with wider audiences. I hope we can build on this in the future to create new and exciting literary exchanges between Singapore and Ireland."

Last year's SWF theme was the Malay word "sayang", which has a number of meanings that include both "love" and "loss". The country of focus was Japan.

Early-bird festival passes will be launched in early August.