SINGAPORE - "How do we find a language of our own?" asked Jamaican author Marlon James, echoing the theme of the 22nd Singapore Writers Festival.

"By listening to the voice that was always there, by waiting - sometimes all your life - to hear that language coming out of your own mouth."

James, the Man Booker Prize-winning author of A Brief History Of Seven Killings (2014), gave the festival prologue on Sunday (Nov 3) at Victoria Theatre.

In a speech peppered with quotations from other writers and dry wit that drew laughter from the audience, he spoke of how he had to "unlearn" his own language in order to reclaim it in writing.

The 48-year-old, who writes most of his novels in Jamaican patois, recalled how he had been taught that the language most natural to him was "broken English" and to regard it with shame.

Aspiring to standard English, he learnt "colonial English" in school - a "verbose, stilted, obsequious" tongue that led a man he had been chatting with at a restaurant to assume he was a waiter and ask him to take his table's order.

James, who earlier this year published Black Leopard, Red Wolf, an epic fantasy inspired by African myth, described fantasy as a "unique genre in that it looks forwards and backwards at once".

"Earlier this year, I was at Oxford (University) and gave the J. R. R. Tolkien lecture (named for the author of The Lord Of The Rings) and I spoke about how lucky it is when a nation has myths they can take for granted."

He had been inspired to write Black Leopard, Red Wolf, after an argument with a friend over the lack of diversity in the casting for the film adaptation of Tolkien's The Hobbit.

"You know Lord of the Rings isn't real," he had told the friend. "It's fantasy. You can pretty much do what you want."

In his address and during a later dialogue with moderator Mrigaa Sethi, he discussed how he researches his novels - for A Brief History, he made two separate glossaries of Jamaican slang from the 1970s and the 1980s so as not to confuse them - and the thorny issue of cultural appropriation.

"We never have a problem when the appropriation is pulled off," he said.

Deniers of cultural appropriation, he observed, believe themselves to be defending freedom of expression, but what they are doing is attacking the right to criticise.

"We're not saying leave other cultures alone, we're saying there's a difference between David Bowie and Vanilla Ice. Both take from black music. One is brilliant, the other sucks." 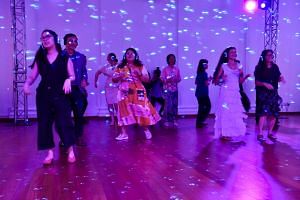 Violent fantasy world not for the faint of heart

The late Bowie is one of the most celebrated rock stars in music history. Vanilla Ice is a rapper. Both are white.

He added: "Embracing diversity means coming to other stories on their terms instead of Orientalism with a guilty conscience on top."

He also shared his own fear of writing. "I approach every blank page with utter terror that this will be the one where I fail."

Audience member Tom Varghese, 34, who works at a technology company, said he appreciated the nuance of James' take on cultural appropriation. "I am impressed that he was so generous in his response. It's a take that is very much needed right now.

"Also he was funny and charming and very, very present. It really felt like he wanted to be here."

The festival, which is organised annually by the National Arts Council and has 290 writers, speakers and artists in 260 programmes this year, runs at the Civic District until next Sunday (Nov 10).