SINGAPORE - With two months to go before the start of the Singapore International Festival of Arts (Sifa), some events are already fully subscribed.

These are Jacob Collier on Harmony & Groove; 1984 - The Book Club; 1984 - The Lecture; First Reads by Dark Matter Theatrics; and Tracing the Displaced: Process Insight Talk by Huzir Sulaiman/Checkpoint Theatre.

Demand for the $10 front-row tickets for students has also been good - 67 per cent of these have already been sold.

These tickets, which are available for most of the shows, were introduced to encourage more young viewers to attend major international productions at the festival.

Festival director Gaurav Kripalani had previously told The Straits Times that these affordable, good seats would be a hallmark of his three-year term at the helm. " Price should not be a bar to accessibility," he said.

Sifa runs from April 26 to May 12 this year. It is organised by Arts House Limited and funded by the National Arts Council.

Jacob Collier is one of the most popular acts among students, but the organisers have been encouraged by interest from students, teachers and schools across most of the shows, Ms Martin said.

There has also been demand for 1984 by George Orwell and Enemy Of The People, both of which are texts used by many schools here. 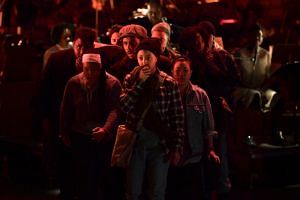 There will be free outdoor programmes during the opening and closing weekends of this year's festival.

Arts House will also be renamed the Festival House for Sifa, which will feature performances, lectures, readings, music salons and "immersive experiences".

The aim, Mr Kripalani said, is to "deepen the festival goer's engagement with the festival beyond the stage presentation".

Tickets for the Singapore International Festival of Arts are available via Sistic (call 6348-5555 or go to sistic.com.sg). Visit sifa.sg for programme details and more information.