Pulau Ubin resident Ahmad Kassim, 82, has lived in the same wooden house built by his father for more than 70 years.

His family originally lived on a rubber plantation in Masai, Johor Baru, but they fled after a Japanese soldier stabbed Mr Ahmad's father in the stomach with a bayonet.

His father survived the injuries, but the family of nine left that very night, travelling overnight by boat to Pulau Ubin, where they had relatives.

Mr Ahmad, who lives in the kampung house with his wife, runs a drinks stall. He has three children who live on mainland Singapore.

"When people ask, I tell them how I ended up here. If they don't ask, I won't tell," he says matter of factly.

Seniors such as Mr Ahmad, who have lived through the war, often have countless stories, but do not always have the opportunity to tell them.

In the exhibition Witness To War: Remembering 1942, these stories - told through animated illustrations, oral accounts, videos and personal artefacts - feature prominently, adding texture and heart to the show.

For D. Paranitharan, a 15-year-old student from Riverside Secondary School, it is a case of realising that his grandfather's stories were more than idle natter.

Mr Balsamy Chetty, 82, is one of the seniors whose stories are featured in the Student Archivist Project, which is part of the exhibition.

Mr Chetty, who was 10 when war broke out, lost his sister during that time. He recounted how his family helped protect their Chinese neighbours from being killed in the Sook Ching massacre, which is believed to have resulted in the deaths of up to 50,000 ethnic Chinese in Singapore and Malaya.

On his grandfather's war stories, Paranitharan says: "I was not always interested in what he was saying. When I told him about this project, he was quite shocked that I actually was asking him to talk about his experiences. But he was happy to do it."

Curator Priscilla Chua says that the National Museum was looking to include stories about the immediate aftermath of the fall of Singapore.

"The timeline was within the few weeks after the fall - how people responded when the world around them collapsed," she says.

Despite the unpleasant subject matter, these seniors displayed great hospitality and enthusiasm.

One war survivor, 82-year-old Madam Sim Soo Wee, brewed tea for the curators when they came to her house and showed them her carefully cultivated bonsai plants.

When they invited her to the museum to take photos, the cheerful woman arrived dressed in a blue samfoo (traditional Chinese outfit) she had made herself. 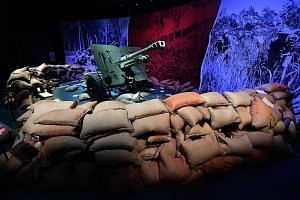 Ms Chua says: "Of course, when they talk about their personal experiences, which can be quite traumatic, they were emotional. But over the decades, they have come to terms with it and are willing to share them with people."

For Mr Ahmad, his surroundings constantly remind him of his wartime experiences. The pathway in front of his shop, where tourists often pass by on bicycles or foot, was used by Japanese soldiers during the war as they marched to their quarters located near present- day Chek Jawa.

When asked to give advice to the younger generation, which has not gone through the hardship of war, he declines politely.

"You guys are smarter than I am - what can I tell you?" he says.