The general manager of the Singapore Lyric Opera, Ms Ng Siew Eng, stepped down on July 1 after 91/2 years in the role.

Her resignation to pursue a second master's degree was long intended, but comes even as the lyric opera is scaling down its output from two major operas a year to just one and undergoing an internal review of its operations and directions.

"I don't know what the Lyric Opera would have been without her," says its chairman Toh Weng Cheong, a lawyer from Low Yeap Toh & Goon. "We had the benefit of her service for 10 years and we're very grateful for that. We wish her well."

He adds that the search for Ms Ng's replacement is ongoing.

A member of the board of directors, Mr Anthony Tan, has been appointed interim general manager and executive director to review the troupe's operations and directions.

Mr Tan said all planned and scheduled programmes for the rest of the year will continue, including September's double operatic bill of Puccini's Gianni and Leoncavallo's Pagliacci and the annual gala concert, which this November celebrates the troupe's 25th anniversary. 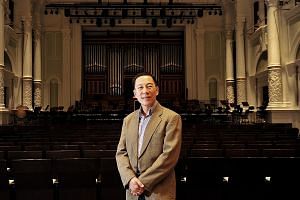 Chng Kai Jin leaving SSO with spring in his step

A veteran with more than 35 years of arts administration experience under her belt, Ms Ng, who is 60 and single, says she is not retiring but is pursuing a master's degree in human resource management from Murdoch University via Kaplan Singapore while seeking other opportunities.

She also has a master's in marketing management via a correspondence course at the MacQuarie University in Australia and did a diploma from the Chartered Institute of Marketing in Britain in the 1980s.

The eldest of seven children, she worked various jobs including as a salesgirl in Metro department store and on the factory floor of lighting business Philips Singapore before finding her feet as an arts administrator with the newborn Singapore Symphony Orchestra in 1979.

After 14 years handling the orchestra's publicity, marketing and promotions, she moved to the Singapore Dance Theatre.

As company manager there for 13 years, she started the troupe's now trademark Ballet Under The Stars programme of dance in the outdoors in 1995 and saw it tour extensively in the United States and Europe.

Such coups earned her a reputation as a "go-getter" among other arts administrators such as TheatreWorks' managing director Tay Tong, who would use her as a sounding board "to exchange information, tease out ideas and talk about mutual challenges, from human resource to funding".

At the lyric opera, Ms Ng introduced its free outdoor concert series, Opera In The Park, in 2008, to help demystify opera and bring its melodies to a wider audience. Two years ago, the troupe also experimented with staging a Singaporean opera, Pursuant, helmed by comedian and director Jonathan Lim and composed by rising star Chen Zhangyi.

However, the lyric opera has been under pressure to reduce its output as it becomes harder to find donors and sponsors for its operas.

It staged Verdi's La Traviata and the Mozart comedy Cosi Fan Tutte in the 2013/2014 season, for example. Last season, it staged Lehar's The Merry Widow in October and this season will be presenting an operatic double bill in September.

Its operating budget according to its website is about $1.8 million a year. Last year, it received a major grant of $320,000 from the National Arts Council.

"I love the job but the financial challenges get harder," she says.

It is one reason she believes her "season at the SLO has come to an end".

"I have to put that season behind me and move on," she adds.