"Her profession's her religion, her sin is her lifelessness," wrote singer-songwriter Bob Dylan of the tragic heroine Ophelia in Desolation Row.

That is how one might think of Keiko Furukura, the 36-year-old eponymous virgin of Japanese writer Sayaka Murata's Convenience Store Woman, whose chief concerns in life are not husband-hunting, but how to best display the new rice ball flavour or sell out all the chicken skewers on promotion. But there is no sin in her devotion, only transcendent bliss.

Murata dissects the strictures of her country's society in this slender, sharp novel, with translator Ginny Tapley Takemori carefully conveying the cadences of her deadpan humour.

Keiko has been working at the Hiiromachi Smile Mart since she graduated. Her peers have gone on to marry and raise families, but she has sallied on, smiling and single, in her 24-hour domain.

Keiko is an unusual woman and not merely by the social standards of a Japan threatened by rising celibacy and low birth rates.

She might uncharitably be described as sociopathic: episodes in her childhood include suggesting to her mother that they grill and eat a dead bird and breaking up a schoolyard fight by hitting a participant on the head with a spade.

As an adult, she cobbles her behaviour together from those around her like an alien might copy a native species to blend in, borrowing the speech patterns of a bubbly younger colleague or her supervisor's fashion sense.

The store manual is her guide on "how to be a normal person". She subsists almost entirely on food from the store.

Unfortunately, her family and friends are over-invested in her spinsterhood. In an attempt to fend off their endless recriminations, Keiko decides to enter a marriage of convenience with Shiraha, a boorish colleague who despises the store and harasses the women in it.

Shiraha, like Keiko, is an outsider, but in a far more damaging way.

He hails from that tribe of misogynist man-children aggrieved that women want nothing to do with them. Though his immense dislikeability is necessary to the narrative, it is hard to swallow.

This is largely because, despite her utter emotional detachment and copycat personality, Keiko is engaging, possibly in the way that the blank slate of Hello Kitty's face has made that mouthless cat one of the world's most beloved cartoons.

The reader feels Keiko's profound, if incomprehensible, happiness at being a cog in the machine, and frustration towards the abusive way Shiraha treats her, even if she herself is incapable of such emotion.

For all the fun she pokes at social conventions, Murata seems uninterested in contemplating the wider implications of a world that could create a Keiko, who not only personifies Karl Marx's theory of alienation - in which capitalist society estranges the worker from his self - but embraces this state as the pinnacle of joy. 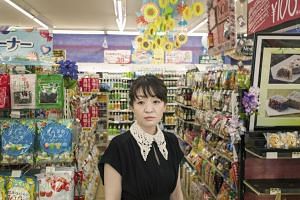 What some might consider a post-capitalist hellhole, she has painted as a fluorescent utopia. But as happily-ever-afters go, it is certainly refreshing.

If you like this, read: Strange Weather In Tokyo by Hiromi Kawakami (Portobello Books, 2014, $26.24, Books Kinokuniya). Tsukiko, a lonely woman in her late 30s, meets her former high-school teacher, who is at least 30 years her senior, in a bar. As the seasons pass and they keep meeting to share food and drink, they form a relationship.

A version of this article appeared in the print edition of The Straits Times on September 18, 2018, with the headline 'Refreshing take on seeking happiness in the ordinary'. Subscribe
Topics:
More
Whatsapp Linkedin FB Messenger Telegram Reddit WeChat Pinterest Print Purchase Article Copy permalink