SINGAPORE - Attendance at free arts and cultural events rose to an all-time high in 2017 but ticket sales did not shoot up in tandem, according to data released by the Ministry of Culture, Community and Youth on Tuesday (Jan 22).

More than 11 million attended non-ticketed arts and cultural events in 2017, a rise of nearly 20 per cent from the year before and the highest turnout in seven years. However, only 1.9 million bought tickets to performing arts events in 2017, about 5 per cent more than the 1.8 million reported in 2016.

In addition, ticketed attendance has fallen from the seven-year high of 2.3 million reported in 2011.

More details will be released at month-end in the Singapore Cultural Statistics report.

Asked whether free events were making it more challenging for arts and cultural groups to get audiences to buy tickets to their performances, Ms Grace Fu, Minister for Culture, Community and Youth said it was "a balancing act" for her ministry between ensuring that Singaporeans of all income levels get to enjoy arts and cultural performances, and supporting arts groups.

"We have to take a balanced view because arts to us is not restricted to just performances in performing halls. We are also very keen to allow heartlanders, people who are not coming to performance halls, to also enjoy art." 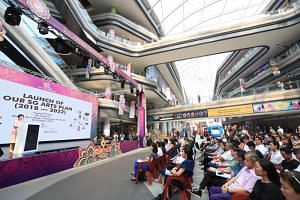 Major free events such as the Singapore Night Festival and Singapore Heritage Festival are meant to cater to such audiences and also "build up the next group of audiences", she added. "It should not just be the same people going to more performances but we hope that people who have not bought a ticket to a performance will start doing so."

Arts groups The Straits Times spoke to said that the exposure provided through non-ticketed events might bring in new viewers for ticketed performances.

Guzheng performer Natalie Alexandra Tse, 32, of music group SAtheCollective says: "While we didn't exactly keep tabs on it, I do feel that audiences who came previously for our free shows during the early days at the Esplanade Outdoor Theatre did translate to a small number of audiences who like our work and therefore came for our other events."

Composer and arranger Dayn Ng, 31, who works with many music groups including Chinese instrumental group Musa, says free shows "solve the problem of exposure" for artists but some locations are more helpful than others. Non-ticketed shows during festivals at the Esplanade - Theatres On The Bay are good for the group's "branding", he says, since these shows are associated with a major performing arts centre.

He thinks more viewers might consider ticketed shows if given a Culture Pass mobile app with sponsored "credits" that allow Singaporeans to buy tickets for arts and culture events. This idea was mooted earlier this month, in Parliament, by Nominated Member of Parliament Terence Ho.

Ms Fu said the ministry would not rule out the idea of such a pass and would "definitely consider it" in relation to the rest of its programme to promote participation in the arts.