NEW YORK (WASHINGTON POST) - Prize-winning author Junot Diaz has withdrawn from a writers' festival amid allegations that he had forcefully kissed a woman and showed aggressive behaviour towards others.

Writer Zinzi Clemmons said the incident happened when she was a 26-year-old graduate student. She had invited Diaz to speak at a workshop, but Diaz "used it as an opportunity to corner and forcibly kiss me," Clemmons wrote on Twitter.

Other female writers have since come forward, accusing Diaz of mistreatment and misogynistic verbal abuse.

Diaz, who won the 2008 Pulitzer Prize for The Brief Wondrous Life Of Oscar Wao, and his agent, Nicole Aragi, did not respond to emails from The Washington Post requesting comment on Saturday (May 5).

In a statement to The New York Times, he said: "I take responsibility for my past. That is the reason I made the decision to tell the truth of my rape and its damaging aftermath. This conversation is important and must continue. I am listening to and learning from women's stories in this essential and overdue cultural movement. We must continue to teach all men about consent and boundaries."

"As for so many in positions of power, the moment to reckon with the consequences of past behaviour has arrived," the organisation said in a statement. "Sydney Writers' Festival is a platform for the sharing of powerful stories: urgent, necessary and sometimes difficult. Such conversations have never become more timely." 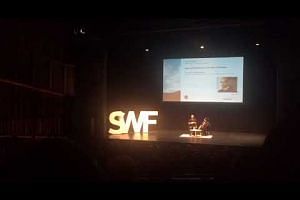 Diaz is the latest in a long parade of well-known men to be accused of inappropriate sexual behaviour. The accusation from Clemmons, who teaches writing at Occidental College in Los Angeles, also comes as the publishing industry reels from allegations against other prominent authors.

On Friday, the same day Clemmons went public with her story, the Swedish Academy announced it will not award the Nobel Prize in literature in 2018 following a sexual misconduct scandal.

Clemmons first confronted Diaz during a live Q&A session on Friday at the Sydney Writers' Festival, where Diaz was a panelist. Clemmons stunned the crowd after she grabbed a microphone, not bothering to introduce herself, and questioned Diaz about the incident six years ago, when she was a graduate student at Columbia University, people who witnessed the exchange told BuzzFeed.

Clemmons also asked Diaz about a recent New Yorker article, in which Diaz revealed he had been raped as a child, and whether it was meant to preempt misconduct accusations against him, according to BuzzFeed.

Writer Alexander Luft, who watched the exchange, said on Twitter the audience "seemed to instantly rally around Diaz" and wanted Clemmons to "stop questioning him".

Unfortunately, the audience (mostly white, older Australians) seemed to instantly rally around Diaz. They wanted @zinziclemmons to stop questioning him, and they applauded Junot's answer. Deep problem among both writers and readers. #BelieveWomen

Diaz has been at Sydney Writer's Fest signing copies of all his books, including his newest, a children's book about a young girl of color. Most of us are asking whether we will still read his books. Now we literally have to think of the children, too.

Luft told BuzzFeed that Clemmons began walking out of the venue while she and Diaz were still talking.

Clemmons' agent did not immediately respond to a request for comment.

After Clemmons elaborated on her accusation on Twitter, writer Monica Byrne responded in a series of tweets with more allegations. Byrne said she was once invited to a dinner where Diaz was also present, and the two had an argument about issues women in publishing face. Byrne described the encounter as "virulent misogyny" and said Diaz shouted the word "rape" while talking to her.

I was 32 and my first novel hadn’t come out yet. I was invited to a dinner and sat next to him. I disagreed with him on a minor point. He shouted the word “rape” in my face to prove his. It was completely bizarre, disproportionate, and violent. https://t.co/WQr0hLW8Z5

My inbox is full of personal testimonials about Díaz right now. It is still free and open to anyone who wants to write, whether because they want to be placed in touch with journalists, or just to share their story with someone who has a feeling for what they went through. 2/n

Carmen Maria Machado, also an author, also said Diaz "went off" on her for 20 minutes in front of an audience after she asked him about his book, This Is How You Lose Her, during a Q&A session at a book tour.

"He raised his voice, paced, implied I was a prude who didn't know how to read or draw reasonable conclusions from text," Machado wrote on Twitter.

In a lengthy blog post, author and former Boston Globe reporter Alisa Valdes said she was castigated after she spoke out more than 10 years ago about Diaz's mistreatment of her.

Valdes said she met Diaz when she was an aspiring novelist in her 20s. She said Diaz told her he would help her career and convinced her to sleep with him. Valdes did, she wrote, thinking they were "soul mates," "two bright rising star Latino writers" together.

"It was painful and upsetting. I had admired him, and thought he cared about me, but he was just using me for... I don't know what for, honestly. Just using me. He had no intention of ever introducing me to anyone in publishing, and he never did," Valdes wrote.

"Everyone in the literary world/the media knew this, or suspected it," Dickson wrote on Twitter. "And yet, when Junot Diaz published his New Yorker Essay - a pre-emptive strike if there ever was one - we gave him nothing but plaudits."

Everyone in the literary world/the media knew this, or suspected it. And yet, when Junot Diaz published his New Yorker essay — a preemptive strike if there ever was one — we gave him nothing but plaudits.

We're part of the problem. And we can do better. https://t.co/EB4UgL0vhQ

In the New Yorker piece, "The Silence: The Legacy of Childhood Trauma," which was published in April, Diaz said he was raped when he was eight by a grown-up whom he "truly trusted".

"More than being Dominican, more than being an immigrant, more, even than being of African descent, my rape defined me. I spent more energy running from it than I did living... The rape excluded me from manhood, from love, from everything," he wrote.

The New Yorker did not respond to a request for comment.

Quill Books & Beverage, a bookstore in Westbrooke, Maine, and Duende District, a pop-up bookstore, have both announced they will stop carrying Diaz's books.

Diaz was born in the Dominican Republic and raised in New Jersey. His first novel, The Brief Wondrous Life Of Oscar Wao, was published in 2007 and won the Pulitzer Prize the following year.

He is also a creative writing professor at Massachusetts Institute of Technology. A spokeswoman did not respond to a request for comment, but a university official told The Post that MIT had not known of the allegations against Diaz.

Other male authors faced misconduct allegations over the past months.

Jay Asher, author of the young-adult novel, Thirteen Reasons Why, parted ways with his agent after his name came up in online conversations about harassment.

In a lengthy statement posted on Twitter in February, Maze Runner author James Dashner, who was dropped by Random House following allegations of mistreating women, said he never intended to hurt another person and he takes the accusations seriously.