Previous winners of the Gustav Mahler Conducting Competition have gone on to make waves in the conducting world:

The winner of the first edition in 2004, Venezuelan Gustavo Dudamel is now one of the best known conductors in the world.

Known as "the Dude", the Los Angeles Philharmonic's music director and members of the Youth Orchestra Los Angeles most recently made an appearance at this year's Super Bowl as the backing orchestra for Coldplay. He took up the post as director in 2009 and his contract has been extended to the 2021-2022 season. The 35-year-old is a product of Venezuela's music education and youth orchestra programme called El Sistema ("the system"), that mostly caters to disadvantaged youths.

He conducted the opening and closing titles for the soundtrack of Star Wars Episode VII: The Force Awakens. He also won a Grammy Award for Best Orchestral Performance in 2012. 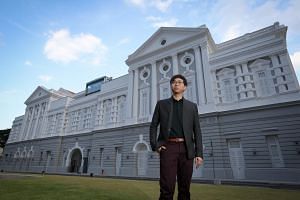 Latvian conductor Ainars Rubikis won the 2010 edition of the competition. He made his debut at the 2011 Salzburg Festival, and went on in the following year to become the music director of the Novosibirsk State Opera House.

The 38-year-old has performed with an international variety of orchestras including the Hong Kong Philharmonic and the Royal Liverpool Philharmonic.

At the end of this month, he has a series of performances at the famed Bolshoi Theatre in Moscow.

Another prodigious talent is 27-year-old Israeli conductor Lahav Shani, who won the 2013 edition of the competition. He was only 24 at the time and almost immediately went on to open the 2013-2014 season of the Israel Philharmonic Orchestra. He first performed with the Philharmonic under famed maestro Zubin Mehta in 2007, and joined them again as solo pianist, conductor's assistant and double bass player for their Asia tour in 2010.

He has since performed with the Los Angeles Philharmonic, Vienna Symphony and Seoul Philharmonic among others.